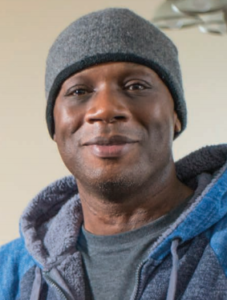 From Cell to Home. One Man’s Work To Keep It Real

Robert doesn’t seem like a guy who would know the inside of a prison cell.  He’s kind, thoughtful, and can articulate a smart ideology, one that includes a gratefulness to his Almighty Father, as well as to his mother.

“I have a praying mother. And her prayers are finally being answered.”

Robert grew up in a loving middle-class home, with married parents and a younger brother in the small town of Dowagiac, Michigan, very near the Indiana state line. His parents taught their kids right from wrong, took them to church, and did their best to instill a value system in them.

But young Robert had a rebellious side to him. In his teenage years, he started hanging with a bad crowd. He and his friends would dabble with drinking, smoking pot, and eventually, they dared to try the harder stuff. “In my teens, that’s when the crack cocaine was really popping.” It didn’t take long for young

Robert to start having a little rap sheet. He was caught stealing from people and stores, doing what he could to make quick money for his new habits.

“It was recreational at first, but of course, it led to addiction.”

Once Robert hit adulthood, it was no more kids gloves. Now he was facing real consequences for his actions: a small stint in jail here, a prison sentence there, and each time he was let out, his lack of money and resources sent him back to what he knew best—drugs and conning people for money.  Because of this, Robert spent 23 years of his adult life behind bars.

“In prison, if you have an addiction and become incarcerated, you know that getting the drugs is harder. The drugs that did get behind bars, I chose not to do. I figured, if I can’t stay clean in prison, then how am I going to stay clean out in society?”

Robert’s most recent stint was five years and ended this past September. He credits the prison chaplain with helping him set up a good place to go. That place would be Guiding Light, where he’d be part of their Back to Work program.

“The first thing they did was give me a drug test, which I passed of course. Then I was assigned a bed and a locker.”

Robert was shown the on-site computer lab, where Back to Work program residents can begin their job search. He also sat down with Christina Felan at The Job Post, and she had him fill out a packet of application papers and helped him set up some interviews.

Within two weeks, Robert found an entry level assembly job in town. It didn’t pay much at first, but after a couple of months on the job, he was able to move up and get a raise.

As the paychecks started coming in, Robert was able to pocket 25% of his income as spending money, and the rest was put into savings by Guiding Light. Typically, a resident in Guiding Light’s Back to Work program will have around $2,000 or so saved up, which can help him find stable housing after 90 days in the program.

Back to Work Program Director Matthew Holmes explains how this doesn’t always happen: “Often, these guys can’t find a landlord willing to rent to them, so they end up crashing on a couch with a friend or relative somewhere. But that isn’t stable. It’s a place to crash, sure, but without that lease or paper agreement, these guys can be kicked out anytime, and then they’re back at square one.”

Guiding Light works hard to address the reasons for client recidivism. Executive Director Stuart Ray has always tried to promote and practice the ideology of “taking the time to get it right.” And that has lead to some hard conversations in the past. “It’s like we’re always pulling back layers of an onion,” Stuart says.

The onion layer, in this case, is the lack of safe and secure housing for people like Robert. He doesn’t know anyone in Grand Rapids, and with his record, he’d be hard-pressed to find someone willing to rent to him, even if he does have the money in his bank account.

So Guiding Light, after ongoing conversations, is trying an experiment. The organization leased an apartment in a safe neighborhood and then began subletting the rooms to men who’ve saved up money and completed the program. In Robert’s case, Guiding Light leased out a very nice, clean and modern three-bedroom apartment for $1500 in the Forest Hills area, a fifteen-minute drive from downtown. Then Guiding Light turned around and rented out each room for $500 to people in the Back to Work Program who might otherwise struggle to find housing. Guiding Light, as the primary leaseholder, can guarantee the property owner that rent will always be paid and on-time.

“I have no credit history and no renter history,” Robert says. “So this saved me.”

The stipulations for renting a room in this manner are pretty simple. Each man must have at least $1,000 saved up and must pay a $600 security deposit. This way, when he leaves the apartment, he can use that deposit for the next apartment he might rent.

“This helps because when I leave this apartment, I’ll have established a renter’s history and Guiding Light will write up a recommendation for me,” explains Robert.

In the meantime, Robert shares his apartment with two other roommates, also from the Back to Work program. They too have the same requirements Robert has, and they all get along pretty well. They share a nice large kitchen and living room. There are two full bathrooms, a den and a basement for storage. “It’s really nice here,” says Robert.

Since being released, Robert was able to reconnect with family. He and his mother are close again, and they talk on the phone often. This past Christmas he was able to spend time with his brother and his family and see his nephew and nieces. “I had concerns about how the younger ones would receive me. I hadn’t met the five-year-old and the eight-year-old I hadn’t seen since she was two. His 19-year old I hadn’t seen since she was 14. She’s in community college now! But once I spent some time with them, they warmed right up to me. It was like they’d known me their whole lives.”

With his days of stealing and using drugs behind him, Robert doesn’t want to take any of this for granted. “I guess I always had this level of support in my life, but I just chose not to utilize it.”

He often thinks back on his life and tries to make sense of it. He wants to come to terms with all the lost time spent behind bars. “One of my friends used to ask me, when I was out and in my addiction, ‘Don’t you like your freedom? Why don’t you like your freedom?’ And I said, ‘I love my freedom!’ And she was like, ‘You can’t love your freedom doing the things that you do. Because when you like or love something, whether it’s another human being, freedom, or whatever, you can’t put yourself in a situation to have it taken away from you.’ So back then, I guess I didn’t like or love my freedom.”

With his bad days behind him, Robert swears he has no more desire to use drugs. “I know the results,” he admits. “I know what using does for me. It’s not a matter of ‘if ’ I go to prison, it’s a matter of ‘when.’ I might as well walk up to the nearest police station and tell them, ‘put me in prison,’ because that’s just how it is with me and drugs.”

Robert was always taught to believe there was a God. He grew up with this knowledge. But he didn’t quite reach out in prayer until recently.  “I just started talking and praying to God and expressing to Him what I wanted to do, and what I needed to do. I’ve been asking for His guidance and direction. Sometimes I’m just in awe, like, I can’t believe all this is happening for me!”