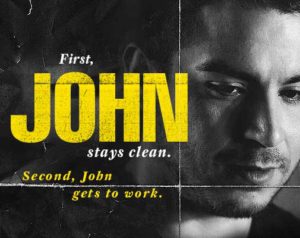 John was living in a small, dusty town in Arizona called Apache Junction, a place considered the “Meth Capital” of the United States. Drugs are cheap and easy to come by down near the border. Before the age of 15, he began smoking and dealing meth, until something new came along.

“One day my dealer didn’t have any meth. He asked if I had ever done heroin, so he shot up and I smoked it. And I liked it,” said John.

When he was younger, John remembered feeling emotionally closed off. He did not expect much out of life. He was self-aware enough to know that he was getting in too deep with drugs, so he moved to West Michigan to be with his mother. He decided to quit cold turkey. In a new place and clean from heroin, he got a job as an iron worker apprentice. He was doing well, but relapse is an easy hole to fall into.

“It started off that I was just going to do a little, then it turns out that I was doing a lot. I couldn’t go to class for my apprenticeship because I was high, or I didn’t bring enough dope with me, so I would leave early. I missed too many days because of heroin and I got kicked out of my apprenticeship,” John said.

At last, his stepfather discovered he was doing heroin and he was kicked out of his mother’s house. Now living on the streets, John would couch hop or stay with his cousin. All his money was going to drugs and eventually he ended up living in his car. John’s mom and aunt finally staged an intervention and he agreed to go to rehab.

For healing to begin, the heroin had to leave his body. “I went through the insane, crappy heroin withdrawals,” said John. “My motive for staying clean is that I wouldn’t go through that ever again.”

After detox, John ultimately ended up at Guiding Light’s addiction recovery program for men. The selection process for this program is not like others. This recovery program is designed to help participants make real, meaningful changes in their lives with intensive therapy and spiritual guidance. After a probationary period, each candidate must be interviewed by a panel of Guiding Light staff. In order to enter the program, John had to get real with counselors about his addiction.

“It was intimidating. It’s all about your past and it’s hard talking about that. They bring up some of the bad things that you’ve done. They dive deeper into those and that’s a hard process. It’s also hard to determine your level of commitment or level of honesty even with yourself. You may think you want everything that you’re saying but your actions don’t align with your words.”

John said a big part of the recovery process is finding the ability to be self-aware and to open up. He’s been at Guiding Light for seven months and wants to transition to Iron House, Guiding Light’s transitional housing for those who’ve gone through the recovery program. Right now, he’s looking to the future and is interested in attending college and majoring in photojournalism.

When asked what he’d be doing now if he weren’t here, John said, “I was at a crossroads before I came here. My best friend offered to buy me a plane ticket to go back to Arizona, but he was actively using heroin at the time, so I ultimately chose not to go through with it. I’d still be using and selling drugs, in jail or dead from OD’ing, who knows.”