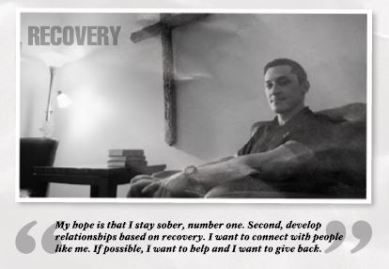 Jeremy remembers how he got into heroin. “I was 19 when my buddy was diagnosed with Hodgkin’s disease and he was sharing his pain pills with me, his OxyContin.”  A dependence kicked in, and the two of them found it wasn’t easy to get the pills they wanted. “Pills hit Grand Haven like a wild fire and the demand drove the price way up.”

He started waking up with severe pain in his back.  Looking back, he figures it was withdrawals, but at the same time, he wanted more oxy to feel good again.  When he and his buddy couldn’t get their heavy duty pain pills, they decided to try heroin.  “It seemed like a good idea at the time,” Jeremy says, with a humble laugh.

“The next ten, twelve, thirteen years, there was never any solid sobriety.”  Jeremy went to a handful of treatment centers over the years, often getting medication to help with the heroin withdrawals.  He’d detox for a week or two at a time, but nothing stuck.

Five months later, Jeremy is still sober and starting to think about his next steps. “For work, I’ve done a lot of different things. I’m pretty handy and capable and I learn pretty quickly. I’m not above anything.  I’ll lay brick. I’ll empty trash. I’ll just be grateful to have a job and a paycheck.

When asked about his hopes for the future, Jeremy declares the most important: “My hope is that I stay sober, number one. Second, develop relationships based on recovery. I want to connect with people like me. If possible, I want to help and I want to give back.”