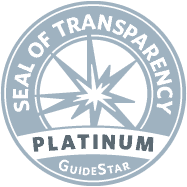 Guiding Light is pleased to announce that it has been awarded Platinum status by GuideStar, the world’s largest source of information on U.S. nonprofits.

The Platinum designation is the highest level bestowed by Guidestar, an honor shared by fewer than a dozen of the more than 2,500 nonprofits GuideStar tracks in the greater Grand Rapids area. The Platinum rating – instituted in the spring of 2016 – is GuideStar’s “highest level of recognition and an opportunity for nonprofits to share their progress in a meaningful way,” according to the organization’s website.

“This recognition helps to underscore the level at which we work very diligently to be accountable and transparent to our donors and potential donors,” said Stuart P. Ray, executive director at Guiding Light. “Since I crossed the threshold here some six years ago, it’s been a high priority for us to consider our relationships with donors as nothing less than a sacred trust.

“GuideStar’s decision to award us Platinum status validates that faith-based philosophy, as well as our practices and protocols.”

Non-profits ranked by GuideStar can qualify for any one of four designations. Of the nearly 2 million non-profits the organization tracks nationally, some 15,000 enjoy Bronze status. Another 20,000 or so are categorized as Silver. Fewer than 10,000 are Gold. And approximately 2,000 nationally are rated Platinum.

In the greater Grand Rapids area, Guiding Light joins a handful of other organizations in earning Platinum status, including Frederik Meijer Gardens & Scuplture Park, JA of West Michigan, Catherine’s Health Center and a few others.

According to Ray: “It’s important to us that people and organizations willing to make charitable donations understand how their dollars are being used. In the non-profit world, GuideStar is perhaps the most respected barometer for measuring and interpreting how an organization is doing, and we’re very pleased to share this news with our West Michigan community.”

How Can a Man Reconnect With Those He’s Wronged? First Light: The Early Years – Mid Century 1929-1956