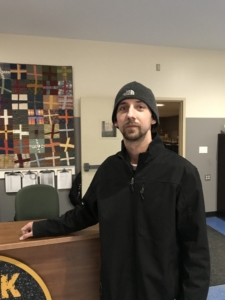 Adam was positive his life was back on track. He was in his early thirties, and after spending time in a recovery facility for a heroin addiction, he started to rebuild his life.  He started his own business in graphic design.  He had solid clients and was building a reputation in web-design and marketing. He bought his first home, a new car and a motorcycle.  He felt confident in his sobriety.

A familiar story begins to unfold.  Things were going smoothly and Adam slowly started putting his recovery on the back burner.  He stopped checking in with his sponsor. He began to let old friends back into his life.  “I told myself I was strong and could handle it. I’d been clean for over a year so I quit doing the work,” Adam told Guiding Light staff. “That was a mistake.”

First, it was just drinking, but eventually Adam relapsed and started using heroin again. It took less than a year to ruin his business he worked so hard to create. He lost his home, his car and his motorcycle.

Now homeless, Adam checked into a recovery center in Waterford, Michigan. As he was going through detox, a friend and Guiding Light program Alumni, suggested Adam go to Grand Rapids.

As Adam made the bus ride to Guiding Light, the fear of not knowing what to expect was getting the best of him.  He envisioned a dirty and overly crowded homeless shelter; filled with chaos when all he longed for was to feel safe and get back on his feet.

Adam arrived to a quiet and clean front reception area. It was not at all what he expected.  The Back to Work Director, Jeff, walked Adam through the intake process, including a drug and alcohol test, which Adam passed.  He was assigned his bunk and explained the rules and his responsibilities during his 120 days at Guiding Light. “I have to admit, I was surprised at how quiet and orderly everything was, but I was taken a bit back by all of the rules. Now I get it. Guiding Light became my sanctuary because of the rules and responsibilities each man brings to the program.  We do our own laundry. We make our own beds every single day. We rotate with chores and helping around the building. We are all clean and sober.”

The Back to Work program requires men to find full-time employment within the first 30 days. Adam had a job on day three. For the next 100+ days, Adam took steps toward his own independence.  With his first paycheck, he began saving 75% of the money.  After a few saved paychecks, he bought a used car for more reliable transportation to and from work.  He continued to save and was able to pay off $1700 in bank fees and overdrafts.  In February, exactly on day 120 of the Back to Work program, Adam moved into his own apartment with a roommate.   He has found a church community and is checking in with his sponsor every single day.  “I want to stay sober. I will always need God and my church family.”

“This program – I can’t believe how much it has helped me.  I see new guys who want to leave the program early and I encourage them to stick it out.  I am truly grateful for this place. Guiding Light saved my life.”

Making Choices That Make A Difference “I Want God to Know I owe it All to Him and His Grace.”