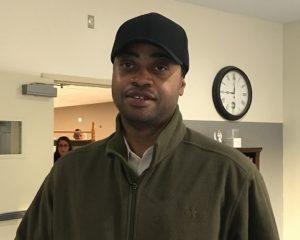 “I Want God to Know I owe it All to Him and His Grace.”

For over 15 years, Frank suffered with an alcohol and drug addiction. He hurt his family. He stole from his friends. Today, Frank has been clean and sober for over a year. He is working full-time, living in his own apartment and attending an accelerated education program as an electrical apprentice. It’s wonderful to see Frank with a smile on his face and a genuinely grateful heart.

A New Year’s celebration left Frank sick and tired. Sick with another hangover and tired of the dark life he had been living every single day. He hit his rock-bottom and on January 1st Frank made the choice to check in for detox and recovery at a local center.

Prayer became a daily ritual for Frank, asking God for strength and guidance. He begged God to help him so that he would never stumbled again. Frank did not want to go back to the life he lived before. Two months into his detox program, with prayer and some guidance from a mentor, Frank created a one year plan, which included recovery, getting a good job, saving money and living on his own.

Frank’s mentor recommended Guiding Light, and even before he was ready to leave his recovery program, Frank met with Jeff, the Guiding Light Back to Work Director. Frank was determined to stick to his plan and needed to see what steps were required to qualify for Back to Work the program.

“Yes, I can pass a drug and alcohol test.”

“Yes, I am definitely ready to get back to work.”

In August, Frank entered the Back to Work program and immediately found a full-time job at a local retail furniture company.  But that was only one step in Frank’s overall plan.  He had some debts he wanted to repay and he wanted his own place that he could call home. Getting a job was important but what he really wanted was to go back to school and have the opportunity for a better paying career.

Frank was determined.  While at Guiding Light, he followed the instruction and guidance from staff. Frank helped with daily chores and attended morning devotionals while working full-time. With his first paycheck, he began saving 75% of his income and immediately began tackling some of the debt issues that had been hounding him for quite some time.  In February, Frank was able to save enough money to move into his own apartment.

Today, Frank is still employed full-time and in school to become an electrician. He smiles as he tells Guiding Light staff, “I am still on track with the plans I made last summer. In a few months, I will be able to start looking for work as an electrician and better pay.  This place has been a blessing.  With Guiding Light and the amazing support you have given me, I have a completely new life. I want to thank you and I want God to know I owe it all to Him and His grace.”