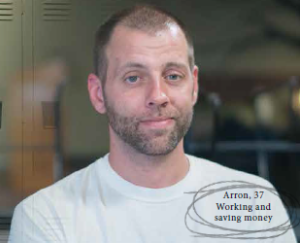 Back to Work at Guiding Light

The Back-to-Work program is perfect for someone like Arron. Until a couple months ago he was working, living at home with his wife and three kids. But a steady addiction issue finally crept up and caused some problems.

“It’s kind of overwhelming in a way, because I’ve never even had a speeding ticket,” says Arron. “Some of the guys here have tethers or been in prison before. It’s different than what I’m used to.”

Faced with an impending divorce, mounting child support and having to move out of his home, Arron is now doing everything he can to get his life back to normal.

After going through some emergency rehab services, Arron was referred to Guiding Light. “Everyone is expected to stay sober here and they’re not afraid to give people breathalyzers or make them take a drug test.” This helps keep Arron accountable and focused on getting healthy again. “When I walk in the door, I know that everyone here is sober… and that helps.”

Arron is still stunned that he’s even here. After all, technically, he’s still considered a homeowner and a husband. Employment has never been a problem for him, let alone homelessness. But he’s a living example of how someone can be knocked off the track by addiction and divorce. And like the good man he wants to be, he’s addressing these issues as best he can.

“My kids know I’m taking care of some stuff,” he says.

Arron is a very smart and capable person. Two weeks into his new job, he was promoted to a manager position. “I’m a people person, so the more people I deal with, the better.”

Looking down the road, Arron is confident that he’ll get back on his feet, save some money and own a house again. And because of Guiding Light’s savings program, 75% of his paycheck is being saved for him. “I’m hoping to have about five thousand dollars saved up by the time I leave here.”

See An Issue? Solve a Problem. How to Change the “Face” of Your family