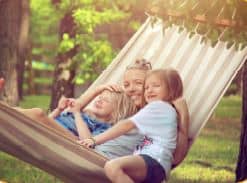 How to Change the “Face” of Your Family

Families come in all shapes and sizes, as one mother shared recently: “Dear Ann Landers: It happened again today. My two sons and I were in a shopping mall, and a total stranger felt the need to comment on the fact that my boys didn’t look anything alike. Apparently, my 6 year old decided it was time he explained the difference. ‘I’m adopted,’ he said. ‘That’s when you have the same family but not the same face.’” (Illustration by Steve Ely)

Did you know you can change the “face” of your family by “adopting” a ministry you care about, like Guiding Light Mission? It’s true! This approach is often referred to as a “Child Named Charity.” It simply means that an individual chooses to include a ministry in their Will, gifting them an equal share to that received by each of their children. You’re essentially including the ministry in your family.

So why is it a good idea? A “Child Named Charity” allows families to make a clear statement of what they value most – advancing the Lord’s work for generations to come. It also provides some great tax benefits.

Here’s an example:
Amy and Roger Smith are 61 and 62 years old respectively and have three children. Their total Estate equals $500,000 after-tax. If they divide their Estate equally between their children, each one will receive $167,000. Now, let’s introduce the “Child Named Charity” concept.

The Smiths decide to include Guiding Light Mission in their Will, dividing the Estate four ways instead. All three children plus Guiding Light Mission will now receive $125,000 each. Additionally, because the Smiths chose to donate to a charity, they’ll receive a size-able tax credit, which their three children will
benefit from as well. Each Smith child will end up receiving an extra $21,000 afterward. For a very small reduction in their children’s inheritance, the Smiths have generously supported the ministry that is important to them.

“Each one must give as he has decided in his heart, not reluctantly or under compulsion, for God loves a cheerful giver.”

“Child Named Charity” can help you do just that – it’s a simple and smart way to live out your values and give confidently.

Guiding Light is a member of Barnabas Foundation. The Foundation’s goal is to help caring Christians make tax-wise decisions and strengthen support for ministries close to their hearts. Call our friends at Barnabas Foundation toll-free at 888-448-3040 to learn more about “Child Named Charity”.

Back to Work at Guiding Light James’ Story of Reconnection