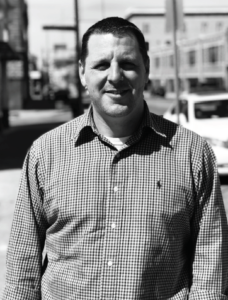 James’ Story of Reconnection with His Daughters

James’ addiction to alcohol strained relationships he had had with his two daughters (ages 17 and 3). His older daughter was angry and hurt and refused to have any contact with her father. James’ younger daughter was shielded from his addiction by James’ ex-wife, but this meant the once close relationship he had with her was hanging by a thread.

Abandoning both his daughters was not a position this once very successful Army dad ever thought he would be in. However, addiction affects many different people from all walks of life. After being exposed to an extensive amount of trauma in the Army, along with a family history of addiction, James knew he would not be able to pull himself out of the depths of his addiction without help.

James recalls the Army giving him a plane ticket back to Grand Rapids. He arrived in the city with no friends, no family, and no job. He lived in a hotel until the financial burden became too much. He had heard about Guiding Light from a friend, who had gone through the program recently and decided if there was any time in his life to give long-term recovery a shot- it was now. Deep down he hoped to get better, not only for himself, but for his daughters.

Through Guiding Light’s recovery program, James has been able to work on the deep-rooted pain he felt. James explains, “I finally dealt with the inner me, what I was ignoring with the drinking.” “Guiding Light Recovery has helped me become a person that I love. I now abstain from alcohol out of love for myself and my children.” “I would’ve walked out of any other place, but the support of the staff and other men at Guiding Light kept me here.”

James is planning to move to Guiding Light’s sober living community called Iron House. He is also planning to work on a custody plan with his ex-wife, so that he can be an active father in his daughter’s life. While James still has pain and struggles in his life, he now sees the light at the end of the trouble.