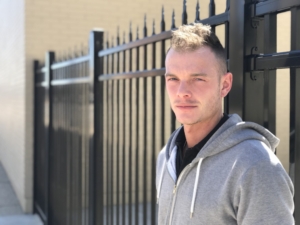 That’s how Alex describes the effects of Guiding Light’s programs on those men who choose to embrace it.

He is quick to establish, however, that such a notion is not necessarily linked to a specific religious belief or denomination. Instead, he uses the term with a reverence for the way in which Guiding Light and its employees and supporters and patrons treat all people.

It took years, but for Alex, Guiding Light helped him establish this truth: “That there are people in this world willing to help others – and Guiding Light is an organization that has the tools to continue making lasting change.”

And in his case and the case of others all around him, that has made all the difference.

Born, raised and educated in Ionia, Alex tried his first alcoholic drink while in 6th grade, got drunk for the first time two years later, and while in high school began to smoke weed. “That became pretty important to me,” he recalls. “I thought it was so cool, and a very sociable thing to do. By the time I was a senior, I as drinking every weekend and smoking weed every day.”

He entered college, but by then was hooked on pain pills, and dropped out early on. “My life as an aspiring socialite was more important than going to school,” he says with obvious sarcasm. “So I quit Lansing Community College and got a dead-end job in a restaurant that I really didn’t like. And I used OxyContin to kind of liven up my night shifts at work.”

Eventually, “every spare penny I had I spent on heroin,” and things tightened up when his mother discovered needles and paraphernalia in her home, where Alex was living at the time. She gave him an ultimatum: Get help or get out.

He was about to enter a treatment program in Saginaw County when a friend of his mother’s intervened and recommended Guiding Light. Alex entered the Recovery program in the spring of 2016 and has been making gains since – bot that he ever wanted to come: “I wasn’t exactly willing to go, and I certainly did not want to be there.”

Still, he recognized that he was traveling a rocky road that ultimately could lead him to his grave, and after the better part of five years, he’d finally hit bottom: “I was sick and tired of being sick and tired. And I was absolutely exhausted to be living this lifestyle. So I did whatever they told me to do. Once you reach a certain level of broken, I suppose you’ve got nothing left to lose. That’s when the miracle can happen.”

And for Alex, it did.

He’s been clean now for two straight years, and looks back on his experience with a sense of awe: After completing the program, Alex secured a job as a cook at a retirement community and moved into an apartment at Iron House. After several months, Alex was able to move into his own place in Wyoming.

Alex still maintains contacts with Guiding Light, sometimes going back to visit residents in the program to offer them hope. “I was afforded the opportunity to stay there for seven months of my life,” he says. “So I do my best to give back.”

He lifts up Guiding Light as a “the place where you’re going to receive a total and comprehensive recovery, and that includes a spiritual overhaul.” The end result? “I learned how to become the human being I’d wanted to become for so long.”

The Light Post Newsletter – May 2018 Zack Gets Back to Work