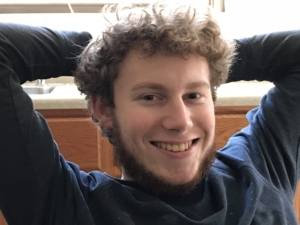 Zack Gets Back to Work.

His grade point average upon graduating in 2016 from Grand Rapids Christian High? A stunning 3.8, and that included grinding it out in Advanced Placement classes.

His ACT score: A healthy 31, which put him in the top 95th percentile of the nearly 2 million high school seniors who take the test annually, a score good enough to almost certainly secure admittance to some of the most highly reputed universities nationwide.

Tragically, alcohol and drugs ensnared Zack instead. And rather than embarking on an illustrious college career, he dropped out after one semester at community college, never dreaming that addiction would create the sordid detours it did.

“In the beginning, I just thought I could outsmart addictions,” he says. “I thought, hey, I’m just experimenting.” But one substance led to another, and “I went through pretty much everything but heroin.”

Following graduation from Christian, he got a good job at an upscale Grand Rapids restaurant, earning enough to finance a “pretty nice apartment” and enjoy times with a “great girlfriend.”

But he got caught one too many times using and stealing alcohol from his employer, and the loss of a steady income led to him being evicted, and later, losing his girlfriend. Destitute, he eventually entered a detox program here in West Michigan, but after exiting, quickly returned to drinking heavily and “doing a lot of psychedelics.”

“I was picking up cigarette butts from the ground and smoking those.” Zack was homeless and desperate, and it became clear that his addiction had become a matter of life or death after sleeping on a night when the wind chill approached zero degrees.

He had burned through his chances with his parents, but his grandparents finally relented and allowed him to sleep in their basement. Finally, in December 2017, Zack found his way to Guiding Light’s Back To Work program. He celebrated 100 consecutive days of being clean in mid-March of 2018.

These days, Zack works full-time – and often overtime – at a metal finishing company, earning $13 an hour. “I work my butt off at this job,” he says with a measure of pride.  His dreams for the future? He laughs in answering that it include the prospect of  “something where I’m not working all the time.”

Zack says he sometimes considers ways in which he might give back to Guiding Light, considering the risk they took with him, and how he’s thrived there.

He’s especially appreciative of Guiding Light’s donors. “Without them,” he says, “I know there would be no program.

“Somebody told me what it costs a month to run this place, and that blew me away, because everything is free here – my locker, the utilities, laundry, it’s just endless. And when I get out of the program, they’ll still support me with a hot meal now and then, bag lunches, toiletries.”

He grabs a breath. “That’s just amazing to me.”