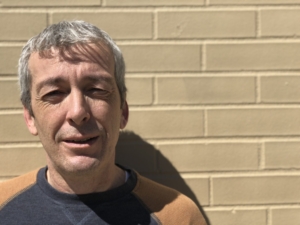 He’s not sure if it’s still there, but when Robert concluded an overnight retreat in Three Rivers, he left for others who might come after him a poem tucked behind a cross in his bedroom.

It tells the tragic story of a nightmare from nearly two decades ago, when he was awakened by his wife screaming “He’s dead! He’s dead!” When he rushed to her side, they discovered that their son Kyle, just four months old, had died from accidental asphyxiation while nursing at his mother’s breast.

Days later, he and his wife and their surviving children were looking down into a tiny open casket holding their Kyle, whose mother had simply fallen asleep while trying to do nothing more than nourish their infant son. It marked a turning point in Robert’s life. He spiraled down into the depths of such despair and seeming hopelessness that on more than occasion he nearly died from the effects of substance abuse.

The poem, he said, was left behind so that others suffering their own demons might learn that “you need to learn how to grieve, that things do pass, that they can get better.”

While Robert’s situation is unique, trauma is a common theme in the men served, and programming takes that into account with intensive therapy. Whether it’s abuse, the death of a child or being abandoned by a parent, most have baggage that contributes to substance use to deal with overwhelming emotions and situations.

For Robert, that road has been long, heartbreaking and dangerous. He’d graduated Bloomingdale High School in Van Buren County in l992 and married shortly afterward, securing a good job in a bakery that lasted 14 years. “We had a nice two-story house, a pool table, a Caddy.” But after Kyle’s death, the relationship with his wife became strained to the point that Robert turned to drugs.

He lost virtually everything – his marriage, his job and the relationship he had with his three other children. “I was so far gone. I chose the drugs and spent the next years using, bouncing around house to house, unable to keep a job – lying, stealing, manipulating – anything you can think of.

“I blamed everything on Kyle’s death, and I blamed God, too.”

No drug was exempt from the menu from which he sampled – including meth and heroin. “I overdosed twice, and the first time it scared me so much I said I would never use again.” He shakes his head. “But I was using again that same night.”

At one point, Robert was shacking up with his father, who also used. Drawing on money rendered from a medical settlement his father was awarded, Robert says the two burned through $130,000 in six months, most of it going for drugs and alcohol.

One weekend night, Robert  awoke to find a team of doctors and nurses hovering. “I didn’t know what was going on. They found me on some street in South Haven, and it looked like I’d been hit in the face with a pistol.”

Discharged from the hospital, he slept that night in someone’s basement with a blanket as his bed. His primary concern? “How was I going to get my next fix?”

Weeping and destitute, he eventually returned to the hospital, expressing a desire to kill himself. A caseworker got him admitted to a residential drug treatment center, and after nine days he was referred to Guiding Light’s Recovery program, in September 2017.

Through intense intervention that included group sessions, therapy and a life coach, Robert learned how to deal with Kyle’s death and more. “I came to realize my mind was so fried that I didn’t even know how to take the right steps anymore.”

Today, Robert is enrolled in the Back To Work program, employed in the kitchen at an area hotel, where he hopes to earn his way back into bakery work there. He’s re-established healthy relationships with his ex-wife and kids, and he’s saving money so that he can once again live independently.

What stunned Robert was how “different” Guiding Light’s programs were compared to others with which he’s been exposed: “You know even after the first week. It’s more intertwined with teaching. And as for the power of prayer and spirituality – they’ve shown me that, too.”

“I would be dead right now if it weren’t for Guiding Light’s programs,” he says. “When I first came here, I couldn’t even talk about Kyle’s death. But now I understand it as a part of me.”

To Guiding Light’s donors, Robert has this to say: “Your money is well-spent. It’s used for well being, to teach people how to live again, to be able to experience their feelings and grasp the happiness possible in a life again.

“What I’m now able to realize is how many wonderful people there are in the world out there. They have huge hearts, and I am so grateful.”