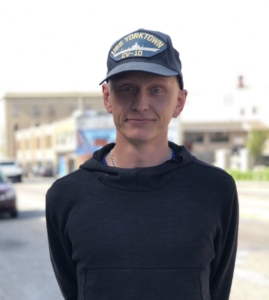 “I don’t remember a time when my family was whole.” Dan, a former Guiding Light Recovery resident, shared with us. He grew up in a split family, as a result of divorce. While Dan was well taken care of by his father, he always felt a sense of abandonment from his mother. She loved him, but when he was young, she was not ready to settle down and become a full-time parent. Dan would visit his mom and he enjoyed being with her. However, due to substance abuse issues, Dan’s time with her was restricted.

As an adult, Dan lived an outwardly successful lifestyle. He had a good job, a nice car, and a place to call home. Then, about 10 years ago, Dan lost his job. Soon after, he lost his vehicle and his home to eviction, along with his sense of pride and self-worth. His stress was so extreme that he began struggling with physical ramifications including Alopecia, the loss of one’s hair due to overwhelming levels of stress.

While Dan was struggling, he lost the person he considers closest to him, his grandfather. A few months went by after his grandfather’s death and it seemed that Dan’s family and siblings had been able to grieve and move on. However, Dan didn’t know how to go through the grieving process and felt alone. This was when he began drinking heavily, in what he describes as “Drinking to die.”

During this difficult time in his life, Dan reconnected with a friend and got involved with her romantically. He thought this relationship would help resolve his feelings of loneliness. Not long after, Dan and his girlfriend decided to marry. Again, he thought this step would “fix” him. Dan and his wife welcomed a son into their lives and Dan thought that surely the arrival of a son would bring him out of his darkness. However, Dan’s drinking only became more secretive. His family thought he was getting the help he needed through counseling, but in reality, Dan was getting better and better at hiding both his drinking and finances.

After Dan’s wife realized his addiction to alcohol was out of hand, she took their son and filed for divorce. Dan had no job, no car, absolutely nothing. He had anger with no outlet. Alcohol was the only thing Dan wanted. He would work side jobs in the construction industry to earn just enough money to eat and buy alcohol. In fact, Dan recalls eating one to two times a week, as food was less important to him than drinking.

Dan was completely isolated. He hid his addiction from his son the best he could, but knew this wasn’t the way he wanted to live. His family brought up Guiding Light, as they supported the organization financially and a family member had gone through the recovery program a little while back.

Dan wanted recovery, but he was scared to death. He would ward off his family’s suggestions and concerns by telling them he couldn’t leave his son for four months. Finally, Dan’s sister said something that opened his eyes. “As I was using my usual excuse, my sister asked me, ‘What’s going to happen to your son if you don’t go?’” This was the first step of surrender for Dan. He realized without recovery, he would not be alive for his son.

Dan began to go through levels of surrender. He walked away from his sister knowing that he had to go to Guiding Light. He had wanted to be sober for quite some time, and walking through the front doors of Guiding Light brought him a sense of relief. He committed to the process.

Through the services provided at Guiding Light, Dan was able to begin eating again and regain his strength. He began working on himself and getting his happiness back. Dan would even go outside in the evenings and gaze at the cross on the church across the street which him a sense of calm during the first few weeks.

Dan tells us, “I knew recovery was going to be difficult; it’s a lifelong process, but I also knew the alternative was death.”

After going through Guiding Light Recovery’s four-month Foundation’s Phase, Dan attended Achieve, a job readiness program, and secured full-time employment. Dan has been working for his current employer for several months now. He continues living at Guiding Light and saving 75 percent of his pay. His future goals include moving to Guiding Light’s sober-living apartments, getting his GED, and attending college for Mortuary Science. He tells us his interest in Mortuary Science came to light when he realized he wanted to help others go through the grieving process and show them the compassion and care that he needed so badly when his grandfather had passed away.

When asked if there was anything Dan would like to say to friends who financially support Guiding Light, he tells us, “I am exceptionally grateful for this program and the donors that support it – it really works.” “My life has depth now – complexity. I am no longer stuck in survival mode. I have thoughts, feelings, aspirations, and most importantly, self-worth.”