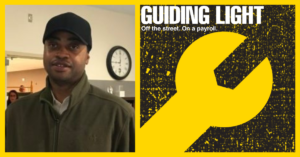 It’s easy to appreciate your surroundings and good fortune. It’s another thing to proactively muster enough elbow grease to impact the surroundings for the better.

So while Guiding Light’s staff may feel blessed to be working right where they are in West Michigan, they also realize that favorable circumstances – much like faith – without works are dead. Men coming to Guiding Light  from outside the area regularly cite the appeal of convenient mass transit, as well as greater opportunities for both living and working. But for men like Frank, the Back to Work program quickly teaches them to be more than products of their environment.

Facing drug and alcohol problems that left him homeless and with no motivation for work, Frank raised stakes and left Chicago for West Michigan.  Shortly after arrival, Frank found early success through another recovery program and a job opportunity, but remained homeless.

Seeking the means to a permanent address, he entered Guiding Light’s Back to Work program and left with a better job, attributing it to the resources afforded to him by Guiding Light staff. While being able to borrow interview clothes certainly helped, Frank believes the commitment and dedication he established through worship and camaraderie were his greatest tools.

Tony, Back to Work Case Manager, agrees that if West Michigan does have a lasting impact on Guiding Light men, it’s the areas constructive effect on aspiration.

“It gives men a lot of opportunities to work in industries they actually want to work in,” Tony says, citing the budding job potential from area investors like Amazon.  “It’s sort of the lure of the big city in a way, in Grand Rapids. There are a lot of things going on here, a lot of positive things.

“Once you get one job, you can get another,” Frank adds. “You gain momentum, getting into the workforce. You’ve got to just want it, and be committed and dedicated to it.  You can find yourself wherever you want to be.”

As with Frank’s dedication, the Recovery and Back to Work programs equip men with skills and qualities that set them apart from other job candidates. Recovery Case Manager, Steve believes it’s Guiding Light’s emphasis on self-guided discovery and understanding that makes them better applicants and workers.

“The awareness we give men on what’s going on with their thoughts; they do much better in interviews because of that,” he says. “They learn how to be in the  present moment, to be aware of what’s going on, so they’re not just reacting.”

Steve adds that Guiding Light’s more vocal group activities, from Declarations to Focus Point presentations, also give men vital public speaking skills – as well as enough empowerment to utilize them.  As he puts it, “It gives them the confidence to aim higher.”

Frank is living proof of Steve’e observation; having just completed an electrician program at a nearby community college, he’s already entertaining a job offer within his field of choice.  And with the strengthened faith and resolve he developed at Guiding Light, he’s ready to work it sustainably.

“They get you prepared,” he states, “for how to get a good job, how to maintain your hygiene, your eating habits, just regular habits. Their goal is just getting you in the habit of doing the right thing.”

Beyond sheer force of habit, Frank credits a litany of Guiding Light resources for setting him back on track, from the computer lab and The Job Post’s readily available staffing network, to his strengthened faith and the community of men around him.

“Guiding Light gave us an opportunity to build a fellowship with each other and encourage each other,” Frank says. “Old, young, all ages, all races; you really get to know them and you get to know yourself a lot.”

From fellowship comes the ability to give back and make an impact. Frank eagerly shares his plans to keep volunteering his time at Guiding Light events. “I can now assist others in leading them in the right direction, and I will lead them directly to Guiding Light.”

Frank concludes by reflecting once more on his new mindset of clarity and pride. “It makes me feel like I have a purpose now,” he closes. “Before, I was working for nothing…now I feel great about going to work. I’m happy to go. I’m there early.”