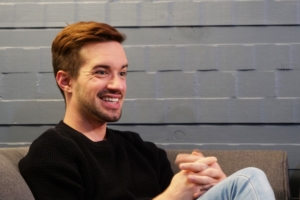 Every night after work, it was the same: Grab some smokes, one or two fifths of vodka, and begin drinking “even before I was back in the car.”

It was a vicious cycle –and one that on at least two occasions nearly cost Mackenzie his life.

“I was born and raised in Metro Detroit,” he says, “a family that included my mom and dad and a younger brother. I graduated from Warren Mott High School in 2009, and I was really into theater then, and hanging out with my friends, typical teenage stuff.”

Mackenzie moved to mid-Michigan after high school, and it’s there he was introduced to the party life, while attending a community college. “I learned how to drink, and used all the same excuses other students did – but the difference with me was that I didn’t know when to stop.”

He managed a coffee shop, and after eventually becoming interested in living in Grand Rapids, made the move there several years ago and secured a restaurant job.

Mackenzie’s drinking increased to a point where he often was inebriated while at work. “I used alcohol to cope with situations, and I became isolated. On days off, I easily drank two fifths of vodka” – and this, despite weighing just 126 pounds.

Two times, he suffered serious injuries after passing out. The first episode occurred in June 2018, when he woke up in an intensive care unit with three staples in his head after falling backward. More recently, he nearly lost his eye in a similar fall after blacking out.

In both instances, Mackenzie says his blood alcohol concentration (BAC) was measured at 0.5 by medical staff, which is more than six times the legal limit of .08 – enough to indicate “lethal drunkenness,” and make a person susceptible to respiratory failure, coma and death.

Mackenzie took his last drink on July 16, 2018, and shortly afterward, checked himself into Guiding Light. His first impression? “It was terrifying,” he says, “mostly because of the unknown. The idea of putting my life on hold for four months was just so beyond me.

Mackenzie discovered that he’d been distancing himself from others, and in the process, becoming lonelier than he’d been willing to admit. Coming to Guiding Light helped him acknowledge that “I was going home every night alone to drink myself to sleep with my cat.”

At Guiding Light, “I found love that I hadn’t felt in a long time, and I was taking that first brick out of that wall I’d built up.”

In the short time he’s been living at the downtown campus, Mackenzie says “I’ve learned there’s power in being vulnerable, and even though you hear it in love songs all the time, it truly is OK to not be OK.

“There’s no reason to be scared of yourself and with being honest with yourself, and in my case, I had to learn that you don’t need to be six feet tall to be strong and to possess power.”

He’s also learned that he needs to love himself, which in turn will allow him to better love others, and as they are. Mackenzie says he was initially reluctant to attend group sessions where he figured he’d be surrounded by “rough & tumble” guys who might judge him adversely. Instead, “I was exposed to nothing but love and acceptance, and each of these guys has brought something to my life, and so they’re all going to be with me for the rest of my life, like a hand-print on my heart.

“I’m hoping,” Mackenzie says, “to get a job this winter, and in the meantime hold myself accountable as I work through the program.

“For the first time in my adult life, I have a hope and a wonder for the rest of my life – the life I never had — or thought I never had.”