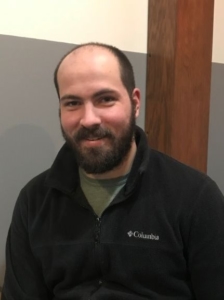 When You Realize Life is More Than a Card Game

Michael isn’t hooked on drugs or alcohol. “I consider myself a social drinker,” he says. “I maybe take a drink once every two months.”

He’s never smoked so much as a single cigarette. And “I’ve never done any drugs. I don’t take Tylenol. Not even coffee, because it’s got caffeine in it.”

But his bouts with homelessness are what led him to Guiding Light, and with God’s grace, he may never again have to call home some vehicle, or a tent, or movie theaters where he would sleep through one movie after another.

Michael was raised by his mother and stepfather – “I never knew my dad” – mostly on a 20-acre spread in Cadillac. At the age of 10, he and two siblings moved with their mother to Wyoming, then to Allendale, where Michael graduated high school in 2004.

While playing baseball in high school, he fell into a group of teammates who enjoyed playing poker. “A few of us would play after school. If we weren’t at practice, we were playing at somebody’s house. I was good at it, and getting better.”

Following graduation, he decided it was a better way to make a living than working some 9-to-5 job. At 19, he played well enough to afford an apartment on his winnings. But he eventually was enticed into high-stakes action, and in one instance, lost $1,000 on an opening hand.

Eventually, he was evicted from his Grand Rapids apartment, then stayed with his mother a while, then at the Job Corps Center the better part of two years. He switched from poker to playing pool, and eventually lost at that, too, and one day in 2011 found himself hitching a ride with a truck-driving friend to Georgia.

“He dropped me off at a random spot with a backpack , and I was just looking in every direction, like ‘Eenie, meeny, miny, moe…’”

He ended up at a campground, financing his stay there by doing jobs for nearby neighbors. Before long, he snagged work unloading trucks at a Walmart down the road, earning enough to buy a used Jeep and bankroll himself for another go at poker.

He moved back to Michigan after six years in Georgia, and upon his return, found a cabin to rent in northern Kent County. He traveled throughout Kent and surrounding counties in search of card games, and was doing OK until the summer of 2018, when his winnings sputtered, his vehicle was repossessed, “and I found myself homeless again.”

For some seven weeks, he scraped up enough cash to buy himself a ticket to an area movie theater, and would stay there through the day and evening, trying to slumber in his seat. He showered at a gym that charged a $10 monthly membership fee.

Aching for a real bed to sleep in – and a place to help him re-set his compass – Michael was referred to Guiding Light. Through their programs, he’s secured a job as a machine operator at better than $12 an hour, and is taking the time to learn about himself.

“This place has definitely helped me to become more humble,” says Michael, who five years from now envisions himself living in northern Michigan and serving students enrolled in an outdoor wilderness program.

Without intervention from Guiding Light, Michael fears he might have ended up sleeping outside. He still shakes his head in amazement that he even ended up homeless: “I realize now that virtually anyone can become homeless,” he says.

“Thanks to Guiding Light, I now have a safe place to sleep, and a better handle on my future. It really is a light to men.”

Fear, Tears, Turn to Joy As Father Finds Solace For Son Save Your Kids from Chaos and Trauma Through a Family Meeting