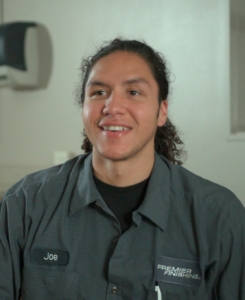 Stability Leads to Salvation. Joseph’s Back to Work Testimony

When I was asked to share my story and what I experienced as part of the Guiding Lights Back to Work program, I felt instant fear. I instantly imagined all of you judging me. But, the gratitude that I have for what the Guiding Light has done for me far outweighs that fear.

Growing up, I enjoyed being outside exploring the woods. I lived in a small farm town. Going outside and spending time with nature was my main form of entertainment. My family had little money, but back then I really didn’t pay attention to that. I was being a kid and I had a big imagination. I could make the simplest things fun.  All in all, I believe I had a very normal life.

When I was 15, I moved to Grand Rapids to live with my father. I began to see all the fun there was to have in the city. The malls, basketball courts, and restaurants; all were accessible by the bus. It was very exciting for a teen boy coming from a little farm town. I did think I lacked one thing. Money. So I got a job mowing lawns. I still remember getting my first check of $333 that I cashed and had made out into all 10’s.

Over the course of the next few years, my associations changed and my desire for more money increased. My patience wore thin. I began to learn how to make money fast. One day at a time, I slowly forgot who I was. Drugs, alcohol and partying became my favorite pastime and my actions lead to crushed friendships, broken hearts, violence, and living in a car with my mother at one point. I still don’t know of a harder time than that.

Eventually, I earned myself four years in a state prison. At first, it felt like it was the end for me, but now I can honestly say that I am a better man.  After deciding to commit my life to God, day by day, He brought thoughts to my mind, helping me realize why my life had spiraled downward. I began to take action and try my best to right my wrongs and learn as much as I could while incarcerated. I am extremely thankful for how much I grew through that experience. Day by day, I reached monumental heights of hope for the future.

I was released from prison May 1st, 2018, a day I occasionally glance back at with a smile.

I spent my first week out at a local mission. I found the establishment very depressing. Being intoxicated was silently allowed. There was no place to safely relax and pray and there were very unsanitary sleeping and bathroom quarters.  It was not a good environment for someone trying to stay sober and move forward in life. Thankfully, I was told about a program nearby that helped men trying to build better lives for themselves.

When I first joined the Guiding Light Back to Work program, I quickly noticed two things that I really liked. 1. It was clean. 2. The structure of the program.

I was given a locker for my belongings, a bed with clean bedding, and access to clean showers. All the basics one would need. But that is only the tip of the iceberg. Immediately I was referred to a staffing agency within the building called The Job Post and in a week I was employed full-time.

I would spend the beginning of my day in the Guiding Light prayer room. That room alone became an amazing place of peace, and allowed me to start my day off right. For work, Guiding Light provided me with a pair of work boots and a daily sack lunch. After work, I often used the weight room which had all I needed for a good workout. I still think it’s amazing that they have all of that available.

Guiding Light provided cubicles where you could read, study, or use the computers to search for apartments. There was a laundry room with soap and three nice meals each day. Most importantly, I had knowledgeable advocates like Tony, who provided great counsel. These individuals helped me make smart financial decisions that would keep me on track to getting a place of my own.And what did Guiding Light want in return? They simply said stay sober, follow the rules, do a chore, and FORK OVER 75% of your paycheck…and we’ll save it for you. Guiding Light is literally set up to help you win. All you have to do is put in the work.

Here are some of the accomplishments I’ve made. Many of which I would not have done without the help of Guiding Light.

1 – First and foremost, I’m free from drugs and alcohol

2 – I am financially stable, with a solid budget I stick to

For a long time, I wasn’t ready for change. I was too busy running with nowhere to go. When Guiding Light opened their doors to me back in May, after four years of having “that talk” with God, I was beyond ready.

Overall, Guiding Light provided me with a great environment away from drugs and many other negative influences. They played THE key role in helping me make a comfortable transition back into society. The Back to Work program allowed me to become financially stable before sending me out on my own, which I know is a very rare opportunity in the world these days. I know none of what they do would be possible without the generous donations they receive from caring individuals.

I say “Thank You” to Guiding Light, to all of the donors who give, and most importantly, to God for all He’s done through you. THANK YOU SO MUCH.

Don’t Make These 3 Mistakes With Your Will Recovery, Reflection and renewal. Michael Finds Life, Anew.