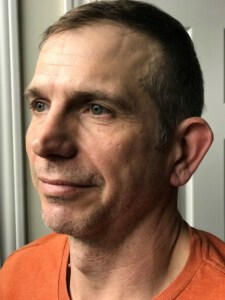 Bruce went from a father who stole his own son’s money, to a dad now reconciled and invested in that son’s life, as well as his son’s half-brother – but it’s been a long and dangerous journey back.

“This place,” he says of Guiding Light, “not only saved my life, but my family. I’m doing things now not just to prevent a relapse, but to create future. I’ve got a whole new perspective.”

To understand the fragile relationship Bruce once had with his son, you need to go back to when he was just a tot, and cradling memories of being at his own father’s knee inside a donut shop, and everyone acknowledging his dad as a friend. “I would always be holding his hand, and everyone saying, ‘Hi Bob’ because they all knew him.

Then, when Bruce was only 5, tragedy struck. Alone with his dad, Bruce witnessed the heart attack that would claim his father’s life at age 47. “Dad was carrying some stuff up the stairs, and he fell. I could see the fear in his eyes. It was the last time I saw my dad alive.”

Over the years, Bruce would lose not only his father, but two other father figures. Looking back, he figures those losses played a part in the addictions that would stalk him and prompt his entry into rehab programs more than a half-dozen times.

Born and raised in Denver, Colorado, Bruce doesn’t remember much about his formative years, only that he and his mother and siblings moved around a lot. He graduated high school in 1989, with plans pending to accompany a buddy into the U.S. Army.

He bailed instead, thanks in part to falling in love his senior year with a girl named Ruth.  Instead of joining the Army, he got a job and, at the same time, “I started doing drugs, smoking a lot of weed and trying cocaine.”

The relationship with Ruth didn’t last, and he upped his dependencies on drugs. By his late 20s and early 30s, he’d created a career installing flooring, but escalated his drug use to include crack cocaine. Though making upwards of $250 a day, he “would get paid on Friday and be broke by Monday.”

The loss of his boss – with whom he’d been living – “got me even deeper into my addiction,” since he was suddenly without both a job and place to live. Since the family of his late boss had roots in Michigan, they invited Bruce to move and work in the Lakeview and Muskegon areas.

In Michigan, Bruce met Heather, a girl from Lakeview 10 years his junior – when he was 27 and she just 17 – and in 1998, they had a son, Bruce II. Over the better part of 20 years, it was a tumultuous relationship, as Bruce says she repeatedly cheated on him, even bearing a second child, Hunter, by another man. He’s still at a loss over why he didn’t ever break up with her during that period.

“I was just a doormat,” he recalled. “I figured a bad relationship was better than none at all. She reminded me a lot of Ruth, and I just jumped right in and stayed with it.”

Bruce fell into a deep dependence on meth while trying to hold together the relationship with Heather, which now included providing for Bruce II and Hunter. He spent 30 days in jail for possession of meth.

“For four years, it got so bad supporting my habit, that we never had any money. One Christmas, there wasn’t even anything for presents for the kids. My addictions were spiraling out of control.”

Bruce recalls with tears falling deeper and deeper into depression and depravity. “It got to the point I was stealing money my oldest son was making from his pizza job. A lot of times, we didn’t have food in the home. Hunter would come to me and say, ‘Dad, I’m hungry,’ and I’d tell him we didn’t have any food, that you’ll eat at school tomorrow.’ It was horrible.”

At one point, Bruce’s habits were costing upwards of $1,500 a week. To pay the toll,  Bruce was trolling Meijer and WalMart parking lots for discarded receipts. He’d pocket them, then walk into the store, steal the items listed on the receipts, and saunter up to ask for a refund. He spent 30 days in jail after being caught and convicted.

He’d already tried rehab at least six times. But now, he realized he needed something different, and leaning on information he’d gleaned from a rehab counselor, he approached Guiding Light.

Since his entry into the Recovery program in September 2018, “my life has changed tremendously,” Bruce says. He no longer has any meaningful contact with Heather, but his relationships with both boys is steadily improving. He’s also secured full-time employment alongside another man in recovery. Together, they perform maintenance duties.

“This place gave me the opportunity to find out who I am, and to know that I’m worthy of love. And I can show love.”

Bruce is now fully re-connected with both boys. Hunter, now 17 and enrolled in high school, is living with what Bruce calls “a wonderful foster family where he has structure, meals, whatever he needs. Both the parents caring for Hunter have been in recovery, so they know what I’ve been going through, and they’ve said it’s OK for Hunter to stay with them through graduation.”

Bruce II is nearly 21 years old, and exploring a career in law enforcement. “We talk daily,” he says. “That relationship has blossomed like you wouldn’t believe. One afternoon, he called me up and said ‘Dad, I’m having a bad day,’ and so I shared with him what helps me through bad days, and he called me later and said ‘Thanks for talking with me today; it meant a lot.’

Part of Bruce’s journey is discovering a spiritual side, not necessarily rooted in a traditional faith, but in exploring a higher power defined by “love, awareness and mindfulness.”

“I see a big shift in my life now,” he says. “I’ve been given a second chance on becoming a dad.”