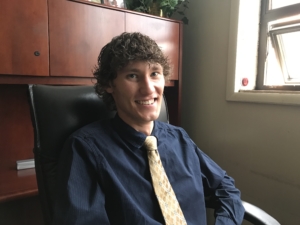 Dmitry is arguably an anomaly.

As an infant, he was sold on the black market at the hands of a cruel babysitter in his birthplace of Russia…later kidnapped from an orphanage…and then graduated high school in the States with a 3.66 GPA.

But eventually Dmitry lost control and ended up homeless and living in his car.

What was unusual about Dmitry’s application to the program last year was his age at the time, just 22, notes Jeff Courtley, who directs the Back to Work program. “While we have had someone in the program as young as high school age, the average age we serve is 37,” he says.

Dmitry’s tragic start in life smoothed out at the age of three, when he was adopted by an American family and brought to West Michigan. He graduated with honors from high school, serving as varsity soccer squad team captain and earning All-District and All-Conference honors.

After a year of college at Western Michigan University, he dropped out in favor of pursuing jobs in the restaurant industry in Grand Rapids. In the fall of 2016, he and his girlfriend embarked on a cross-country road trip, working odd jobs as they made their way across the southern states and then west to California.

They returned, leased an apartment they couldn’t afford, split up, and Dmitry found himself living from couch to couch and then in his car.

Homeless and without steady work, the weight on his 5-foot-10-inch frame went from an already lean 150 to 130 pounds. At one point, he sought counseling from a mental health facility and was prescribed drugs for anxiety and depression.

Realizing that finding a job would help create a healthier lifestyle and allow him to live in better comfort, he applied and was accepted into Guiding Light’s Back to Work program in October 2018.

He found employment through The Job Post, Guiding Light’s very own social enterprise that offers hiring and recruitment opportunities for men and women who possess a valid I.D. and can pass a drug test.

Most of the jobs pay better than minimum wage and are in manufacturing. In Dmitry’s case, he found a good-paying, second-shift job and was able to pay off over $3600 in debts he’d accumulated through student loans, past evictions and medical expenses.

Dmitry has since finished the Back to Work program and lives and works independently.

“Dmitry was very compliant and motivated,” says Jeff Courtley, Guiding Light’s Back to Work Director. “During the first 30 days especially, we’re concerned about how a candidate walks the walk, and not how they talk. Dmitry definitely walked the walk.”

Dmitry views Guiding Light as the touchstone that helped him get his life back on track, and in more ways than just securing employment: “They gave me a safe and secure environment, a place not only to survive, but thrive,” he says. “All of my necessities, both physically and spiritually, were taken care of while I put things back into place.”

Dmitry understands that his four-month stay at Guiding Light was covered by donations from people he’ll likely never meet. “To those donors, I have immense gratitude for giving me the opportunity to turn my life around and become the best person God wants me to be.”

“I’ve been able to switch from a survivalist mindset into a productive member of society. And now, I’m going to keep building on that, looking for ways to continue progressing.”