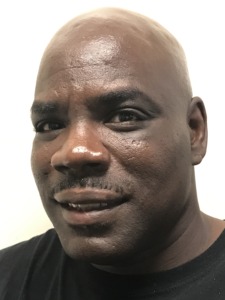 There was a time when nobody would have bet on Dwight coming up with the money to pay for his daughter’s funeral.

But this past summer, he did just that, partnering with Guiding Light to arrange for a dignified final service after Whitney, 32, succumbed to the effects of Lupus, a complicated and unpredictable disease that can affect any organ and in extreme cases like hers lead to death.

To appreciate his situation, you would have to travel back some four decades, to when Dwight was growing up in the Battle Creek area without his father in his life, in and out of foster homes and juvenile facilities. “I was poor, and I wanted to have nice things that I couldn’t have. When I was six or seven, I went into a store and stole a toy.”

As he grew, anger issues surfaced. He fought a lot while in junior and senior high and found himself enrolled in Special Education classes for children who are emotionally impaired. Alcohol and drugs found their way into his life, as did jail and prison, mostly for theft-related crimes to support a habit that included abusing crack cocaine and alcohol.

While living in a transitional housing unit under the auspices of the Michigan Department of Corrections, Dwight learned about the “new” Guiding Light, which was advertising itself with the words “We’re not a mission; we’re on one.” Years earlier, he’d patronized Guiding Light, but before it went through wholesale changes under the direction of its current executive director, Stuart Ray.

He also has purchased a vehicle, paid off bank debt and established a healthy credit line. Then there’s the $2,600 he was able to save to help pay for Whitney’s funeral. Her mother was unable to contribute, so Dwight gladly shouldered the expense. “If I hadn’t changed my life here at Guiding Light, I wouldn’t have been able to pay for the funeral costs. The only regret is that I didn’t spend enough time with my daughter,” Dwight later comments.

Dwight considers himself somewhat of a “loner,” but it no longer has a negative connotation to him: “That’s just who I’ve always been,” he says softly. “It’s who I am.”

Dwight continues to work his second-shift job as a machine operator. His goal is to not only own his own home but possibly acquire other properties so he can establish some rental income.

Dwight wants to walk the walk, just like Jesus did. “I had to go through some things to get where I am. There were a lot of trials and tribulations and God helped me through. I want to focus on His message and I ask myself ‘What does God want from me?’ and I keep hearing Him say ‘Your actions will speak louder than words. Live by example, not by words’.”

His advice for others facing seemingly insurmountable obstacles? “You need to find a place that’s safe, where others aren’t using (drugs). We’re a product of our environment. And if you want to really know a person, take a look at the friends they keep.”