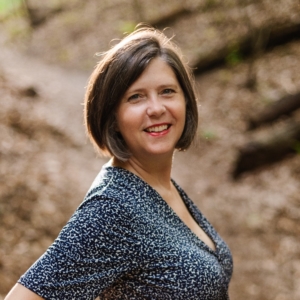 Faith, Transparency, Compassion and Gratitude: A Profile of Starla McDermott

For Starla McDermott, the third time really was the charm.

When she saw an opportunity to join the team at Guiding Light, she was so drawn to the nonprofit she actually applied for the development coordinator position three times before being hired.

“I felt called to be at Guiding Light and, five years later, I still feel this is where I am supposed to be,” McDermott said. “There is something compelling about this organization and its mission, so I persisted, even though I had been turned down twice.

“I had a little fear of the unknown in joining the team but felt confident about the job I was hired to do and was committed to doing it well.”

Her skills and determination to hit the ground running paid off as she was promoted to development director within just over a year – a leadership role she has held ever since.

The journey to where McDermott is today has not been easy nor direct. Prior to joining the team, she had spent 17 years working in corporate sales and marketing, excelling in the work but feeling unfulfilled. Her job brought her across the country from her hometown in Napa, California to the Midwest, where she was faced with more hardship.

At one point, she was newly divorced and homeless with three young children, including an infant. She spent an entire summer homeless in Indiana. Even though she had a job and a car, after paying for daycare, she couldn’t afford rent. And even though she had three young children, she never asked for help – in fact, she “never told a soul – there was so much shame in that.” She slept behind a church before settling in at campground in the dunes with her little ones.

Having persevered through the difficult divorce and been humbled by that long summer, she is determined to help others overcome their struggles, too.

“I believe you’re only given what you can handle,” McDermott said. “When I was homeless, I was blessed because it was in the summer. If it had been in winter, I’m not sure what I would have done.”

She has worked through years of guilt and came out the other end to be more compassionate, humble and vulnerable – and willing to share her story, much like the men in Guiding Light’s programs.

“It is so sad that some people have to suffer alone and not tell others what they’re going through,” McDermott said. “I think it’s important to realize that everybody needs help sometimes.

“I kept my secret for years because there was a lot of shame in it. I didn’t want to lose custody of my kids. In the last decade, there’s been a lot of growing and understanding that homelessness happened through no fault of my own. I did the best I could.”

McDermott eventually grew her savings and worked her way up in the natural products industry, becoming a territory manager responsible for marketing and sales in three states. The position brought her to Grand Rapids in 2006, where she’s lived ever since. Despite her success in the field, she felt discontented. Fed up with the stress, nonstop travel and competitive nature of her job, she decided to quit in 2010.

A career coach helped her unravel her new perspective on the world and discover her interest in the nonprofit sector. Feeling guided to a new life, she went back to school in 2011 to take nonprofit classes. At age 40, she took her first nonprofit job as an intern at an organization focused on building sustainable communities and protecting water resources.

“I’m pretty proud of that,” McDermott said. “You’re never too old to learn something new or find a better path.”

The internship kicked off her new career where she gained experience in special events, website management, fundraising and marketing – skills she uses daily in her role at Guiding Light now.

Her honesty and empathy in relating to the struggles of the men served by Guiding Light helps her excel in sharing the men’s stories and how the nonprofit is helping them live life in a new way.

“At the end of the day, my goal is to tell the stories that resonate with donors so we can stay sustainable and continue to do the good and necessary work that we do for those struggling with homelessness and addiction,” she said. “We’re very real about the situations these men come from and the resources and spiritual direction we enlist to help them turn their own lives around. We put faith, transparency, compassion and gratitude at the forefront of all that we do.”

McDermott and the donor relations team are continually engaging with those who give their time, money, resources or advocacy to help Guiding Light achieve its mission of partnering with individuals to fulfill their God-given potential. McDermott maintains any contribution, no matter how small, makes a huge difference.

“We have had donors tell us they have never been called by a nonprofit just to say thank you, even for a $10 donation,” McDermott said. “But sharing our gratitude is central to what Guiding Light is all about, and that sentiment usually leads to a deeper conversation with our supporters.

“We really get to know our donors, and we often hear they appreciate having someone to talk to. Some have family suffering from homelessness or addiction, and they truly have a heart for what we do. It’s those connections that make my job so fulfilling.”

“When I see someone first come in, it’s evident they’ve been through a lot. They’ve just detoxed, there’s no smile, you can sense the hesitation and fear, and see the darkness in their eyes,” she said. “But the difference you see even in a month is incredible. You see them smile and can feel the thankfulness rippling off them.

“Their whole demeanor changes from the dignity we have helped them rediscover. Getting the opportunity to tell those stories is pretty awesome.

“And we know those stories wouldn’t exist if it weren’t for the support our friends, board members, staff and donors. To be able to give people the opportunity and resources they need through rescue, recovery and re-engagement is a truly special honor I hold dear to my heart.”