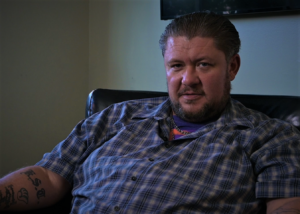 “It’s either this or death.”

After years of alcohol use and sporadic relapses throughout his adult life, Jason had enough. He went through several residential substance-abuse treatment programs with only short-term results. His drinking led to health issues and contributed to three divorces. He wanted to make lasting change, so he came to the place known for giving men the time, space and hope needed to achieve long-term healing and rehabilitation: Guiding Light.

The 45-year-old was born and raised as an only child in Grand Rapids. Theirs was a small but tight-knit family until his mother died from a heart condition when Jason was just 11 years old. His dad remarried, and his teenage years became troublesome. He had difficulty getting along with his stepmom and ended up spending most of his time with friends who were gang members. The group often had run-ins with the cops after curfew.

Eventually, his father and stepmom moved to Belmont. Jason opted to stay with his grandma for a couple of years so he could graduate from Union High School. He started drinking and smoking marijuana around 15 years old. He got so sick his first time getting drunk that he avoided alcohol – until he got to his grandma’s house, and it became more accessible. He’d continue to drink and smoke socially, not knowing the struggles he’d have with addiction in the years to come, resulting in many hospital visits and broken relationships.

When Jason turned 18, he racked up a weapons charge, which meant a tether, 100 hours of community service and two years on probation. He met and befriended his future brother-in-law when working at a grocery store – and started taking 40 ouncers after closing up shop.

His drinking escalated after he dated then married his first wife and had a daughter. Things were going smoothly at first – they bought a house, managed their bills and limited drinking to the weekend. But in 2000, Jason landed a job in the heating and cooling industry, which led to a more erratic work schedule. He often spent his days off drinking vodka and other liquor.

“For whatever reason, I got that idea in my head, ‘well, it’s 5 o’clock somewhere,’ so I would start drinking during the day or in the morning,” he said. “That’s where I think it really turned.”

After 12 years of marriage, they separated, and Jason went on to live in an apartment alone. His stepmom became concerned for him after the divorce and knew about his ongoing drinking. That’s when she encouraged him to go to Guiding Light for the first time. He enrolled in the “New Life in Christ” program in 2011 but was unable to stay sober for long.

He dated and married a woman who was also working on her sobriety. They had an on-again, off-again relationship together – and with alcohol. Jason went back to Guiding Light for the second time in 2013, enrolling in the Back to Work program. It helped him find employment, but then an injury put him out work and back on the bottle. He got himself into a 30-day program at Salvation Army to try to get on the right track. In the following years, his relationship with his second wife came to a head, and they divorced. Jason relapsed and went to Salvation Army again, this time for a 6-month program.

During that time, his new girlfriend became pregnant with twins, but one of the boys did not survive more than an hour after birth due to health complications. The death of his son intensified Jason’s reliance on the bottle. He unsuccessfully tried to hide his drinking from his family and, in December 2020, he was fired again as a result of his drinking.

Unemployed and with dwindling family support, Jason went through the most difficult divorce of all three. He felt his addiction had become a matter of life or death and knew the time to get sober was now – or never.

He had heard how intense Guiding Light’s Recovery program had grown since it had been recast in 2013. It’s now known on the streets as “no-joke recovery” and takes a more holistic approach to drug and alcohol treatment. The four- to six-month residential program combines evidence-based practices, life-coaching, therapy, support groups, spiritual direction and resources to equip men to stay sober and live life in a new way.

Jason walked through doors of Guiding Light and enrolled in the Recovery program in March. It was a completely different experience than any program he’d been through before – and he felt it just might work.

“With connections to community support groups outside the building, having the life coach, a spiritual advisor and therapy – the whole combination helps you work out the emotional stuff,” Jason explained. “It just works if you do what you’re supposed to, stay connected and stay consistent.”

Another reason Jason chose to reach out to Guiding Light was because of the sober-living community known as Iron House.

“After I’d finish a treatment program, I didn’t have anywhere to go,” Jason explained. “None of my family would take me in, but Guiding Light had Iron House. I knew there’d be that aftercare part of it after the program was done.”

Today, Jason has been at Iron House for about three months. He started working in the engineering department of a global company based in Michigan and says it’s one best of the jobs ever had. His goal for the future is simple: stay sober. After so many years of rushing through life, he’s learned the importance of taking things slow in order to achieve lifelong healing and sobriety.

Thanks to the generous support of donors, Guiding Light is able to give men like Jason the resources and opportunity they need to better themselves and fulfill their God-given potential.

“Donors to Guiding Light save peoples’ lives by their donations, which help the organization keep running and doing good work,” Jason said. “They saved my life twice.”