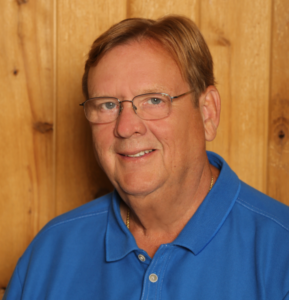 God is the Way Out: Guiding Light Board Chair Connects Recovery Success with Spirituality

Ed Postma first noticed there was something different about Guiding Light when he saw a young man struggling with addiction begin to ask questions about spirituality and to talk about God.

After more than three decades in recovery himself, Postma served as sponsor and mentor for scores of younger men just beginning their journeys – but this time, it was different.

“I picked up this young man from Guiding Light every Thursday for support group meetings, and I started seeing the changes,” Postma recalled. “I had been trying to help him for years, and I was impressed with what was finally happening within him.

“He asked me if I wanted to meet ‘Mr. Ray,’ as the guys called Executive Director Stuart Ray, and I was interested in learning more. We met, and Stuart described the Recovery program to me and said he was open to suggestions. Along with three other guys, I sat down with Stuart to share some ideas for modifying the Recovery program, which were accepted – and are now incorporated into the very successful program we run today.”

Guiding Light offers an intensive addiction recovery program for those struggling with drugs and alcohol. Known on the street as “no-joke recovery,” the Heartside nonprofit offers a four- to six-month residential program that combines evidence-based practices, life-coaching, therapy, support groups, spiritual direction and resources to equip men to build a life worth staying sober for.

Offered free of charge and funded entirely by donations, Recovery replaces the chaos of day-in-day-out addiction with a proactive, extensive, all-encompassing and healthy routine. Men attend individual and group therapy sessions, as well as connect daily with outside community support groups who are all committed to their recovery – the latter one of the changes recommended by Postma and the other men who met with Ray.

Men who complete the Foundations portion of Guiding Light’s Recovery program have the option to move to Iron House, a sober-living apartment setting that provides a safe and secure residential environment outside the inner city. The apartments allow men to live more independently as they transition back into the mainstream of society.

Statistics show 76% of men who come through Guiding Light Recovery, find employment and move to Iron House will achieve long-term sobriety. Those results are in stark contrast to a national survey that shows only 33% of men who attempt to get sober on their own are able to maintain their sobriety more than one year. Postma attributes that success to the nonprofit’s emphasis on spirituality and developing a strong relationship with God.

“To me, getting sober and living a productive life has a whole lot more to do with your relationship with God than with anything else,” Postma noted. “When you’re deep in addiction and can’t see a way out, we find out God is there and He’s the way out.

“We are unabashedly Christian in our approach at Guiding Light, although we don’t turn away anyone who has a different belief system. We really focus on spirituality as the pathway to sobriety.”

Postma joined the board of Guiding Light six years ago, serving as board chair for the past three. The Grand Rapids native graduated from what was then Central Christian High School before studying political science and economics at what is now Calvin University. Postma served in the 82nd Airborne Division of the U.S. Army during the Vietnam War.

After returning to West Michigan, Postma took a position in the county’s juvenile detention center before joining Baxter Community Center as an assistant director. He decided to pursue law school and was encouraged to apply at Amway Corp. so he could work nights in security there and take classes during the day.

An encounter with Amway co-founder Rich DeVos opened Postma to the possibility of a career within Amway. He started in sales support and worked his way up in the organization, working in compliance, business development, risk management and other roles before retiring from Amway after 37 years.

But Postma didn’t retire fully. He continued to do board work in order to be of service to others – something he learned and valued during his own time in recovery.

“When I was in full-blown addiction, spirituality wasn’t something I was considering,” Postma recalled. “Spirituality is a big part of the recovery program that brought me back to God. My understanding of what my life is supposed to be about is to be of service to others.”

That service will continue to others struggling with addiction issues even after Postma ends his term on the Guiding Light board. The organization is in the middle of a strategic planning process so it can continue to evolve and focus on what’s next.

“We are taking a fresh look to see what needs to be done down the road,” Postma explained. “Guiding Light has had nearly a century of service to Grand Rapids and the greater West Michigan community and, we hope, will contribute more as time goes on.

“We have succeeded by remaining nimble and so we can meet the needs of our Heartside neighbors and society as a whole. We look forward to continuing to serve.”

Guiding Light Donor Relations Officer Named One of Senior Neighbors’ ‘16... Who’s That in the Spotlight?