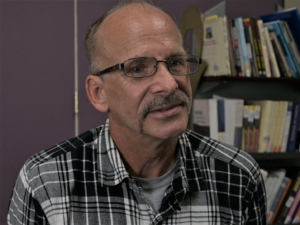 Alcohol is Only the Symptom: Mike Finds Spirituality, Acceptance Through Guiding Light Recovery

Mike found the camaraderie, structure and discipline he craved when he enlisted in the U.S. Marine Corps after high school. Eight years later, he surrendered to the bottle after being wounded in combat in Kuwait – and watching two of his best friends die trying to rescue him.

The Benton Harbor native spent the next 20 years in exodus, deprived of his unit, his self-worth and his purpose. He became a daily drinker of vodka who began mixing the booze with Vicodin and oxycodone, pain killers that hooked him while recovering from his war injuries. Although successful in weaning himself off the pills, Mike turned to methadone, increased the alcohol and fell in love with meth.

Fast forward to January 2021. His boss came looking for him after three no-shows at work and found Mike curled up in bed, drunk and high, a needle on his dresser and feeling mighty sorry for himself. At 112 pounds, Mike was “skin and bones,” beyond caring whether he lived or died.

“I didn’t even question it when he told me he was taking me to the hospital,” Mike recalls. “I needed to go. I needed help. Had it not been for my boss, I would have just laid there and died. I wouldn’t have ended my life, but I wouldn’t have cared if I had died.

“I went to detox and started to explore the deeper issues on why I was drinking and using drugs to begin with. They’re only the symptoms. I didn’t feel loved, I didn’t have any faith in myself or God, and I didn’t feel adequate.

“After detox, I was referred to Guiding Light. I needed a place with discipline and structure, which I had really missed after being out of the military for 20 years. So, I left everything behind to come to Grand Rapids and start over.”

Mike finds the roots of his addiction planted in childhood. His mother was 18 when Mike, her second child, was born. He said both his mom and dad were both “too young to be parents.”

“I didn’t know too much about love,” Mike explains. “That wasn’t a word used in my family. I remember my mom and dad were fighting over something when I was 5, and I asked her what was wrong. She said she didn’t love me anymore.

“As a 5-year-old, that stuck with me. I’m 56 now, and that still sticks with me. That was the path that started me down to where I was going.”

His military service was a bright reprieve. An extrovert who thrived on people, Mike loved everything about being Marine and instantly knew what he wanted to do with the rest of his life.

That came crashing down around him during the ’91 invasion of Kuwait. Mike was rappelling down a rope from a Chinook helicopter when a bullet skimmed his shoulder and forearm. He lost his grip and fell 30 feet, breaking both of his feet on impact. Two of his closest friends lost their lives trying to pull him to safety.

“They gave their lives for me,” Mike says in a quiet, tight voice, pausing before he resumes. “I watched my friends die. I learned how to put my emotions away.”

Dedicating himself to therapy, Mike worked hard to learn how to walk again, thinking he could rejoin the Marines. But a medical discharge awaited him, divorcing Mike from his purpose and chosen career. He took an adjacent job in 1998, working for company that trained independent contractors for the military – and that’s when he started drinking.

“That when my career with alcohol really started,” he remembers. “It progressed quickly. When I drank, I could feel emotions again – and I liked that.”

Mike was fired from that first job for being “nothing but a drunk.” The next two decades were a blur, going from job to job and bottle to bottle. Addicted to painkillers after his war injuries, Mike turned to buying drugs on the streets after his prescriptions ran out.

He weaned himself from first Vicodin and oxycodone, then methadone, dialing up the alcohol to manage the effects of withdrawal. Mike spent eight years drinking daily, but only after work and on weekends – then he discovered meth. After two years of injecting meth and chasing it with vodka, he was a regular no-call, no-show at work – until the morning his boss found him half-dead and saved Mike’s life.

Mike first came through the doors of 255 Division Ave. S. on April 18, COVID-19 still raging through West Michigan. He was immediately drawn to the discipline of Guiding Light’s “no-joke” Recovery program, which combines evidence-based practices, life-coaching, therapy, support groups, spiritual direction and resources to help men build a life worth staying sober for.

“I need a group; I need a unit,” says the soldier still in Mike. “Without that, I don’t think I could survive. Guiding Light has given me this unit and taught me to examine the deeper things that bothered me throughout my life, stretching all the way back to when I was 5.

“I can’t say enough good things about Guiding Light. I have a unit. I have two life coaches. I have fellowship through the support groups I attend. I’m starting to deal with my emotions, but I’m still having a tough time feeling.”

Mike is also struggling with his spirituality. He points to the hurtful words of his mother, failed relationships and broken dreams, noting while he was drinking, he always blamed God for his woes – including the loss of his Marine career.

“I have regained my spirituality,” Mike notes. “I have a higher power I pray to every day. Sometimes, on the bad days, I revert and blame God. That will be my biggest struggle for a while.

“I know He stands with me. My spirituality starts strong, then gets weaker. I’m working to make sure it stays on track.”

After completing the Foundations phase of Recovery, Mike intends to move to Iron House, a sober-living apartment that provides a safe environment outside the inner city that enables men to live more independently as they transition back into the mainstream of society. He’s continuing to lean on his Guiding Light life coaches and focused on two goals: connecting with the daughter he walked out on when she was 5 and meeting his grandchildren and establishing a loving, healthy relationship with a woman who can be his partner.

“I’d been drinking and drugging for 20 years,” Mike says. “I thought I had it under control, but that was my lie. I never thought I needed to quit, and I never wanted to quit.

“But then I couldn’t be a soldier anymore. I couldn’t hold a relationship. I began to care – and to realize I didn’t want to drink anymore. I wanted to change my life.

“Guiding Light gives men a wonderful chance to do that. To me, the greatest thing about Guiding Light is not getting sober – it’s about you changing your mental, emotional and spiritual life. Once you do that, the alcohol and drugs will go away.

Who’s That in the Spotlight? Food Donations for the Community Empowerment Project