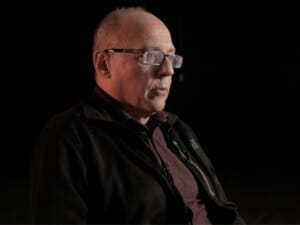 Damon’s Journey From Utter Desperation to a New Life Filled With Faith, Hope

At one point in his life, Damon Whitmore was on top of the world, living in a gorgeous home on five acres alongside a beautiful wife and daughter with two nice cars, a pair of adorable dogs and money in the bank, enjoying his role of partner in a successful law firm.

In the next, he was alone and jobless, hardly a dollar to his name, his wife and daughter out of the picture, and awakening every morning “resolved to drink myself to death.”

“An epiphany?” he asks. “Yeah,” he answers with a soft laugh. “Probably a lot of them. But the biggest was in coming to Guiding Light and realizing I couldn’t do this by myself.”

Damon Whitmore is a survivor, a man who showed up at our threshold carrying nothing more than a few articles of clothing in a black plastic bag. He was 57-years-old, and he can trace his addiction to alcohol back to when he was just 12 and standing outside party stores paying men to buy him booze.

His drinking only escalated as he grew older, but against all odds, he somehow finished high school, earned a college degree in anthropology and the Russian language. He served eight years in the U.S. Navy, became a lawyer and ascended to partner at two different firms.

A native of Michigan, Damon grew up in the Metro Detroit area, reared in what he calls “a good family with a good childhood” even though his parents – he was an engineer, she a nurse – divorced when he was five or six. For reasons he can’t pinpoint, he began drinking even as a pre-teen. “It was just around,” he says of alcohol.

He nearly flunked out of Berkley High School in Oakland County because he was high most the day, waking up to weed first thing in the morning and then smoking again on a porch where tobacco use was allowed at the school. “When everyone else was in the 12th grade,” says Damon, “I was basically repeating my sophomore year, which I’d nearly failed because all I was doing was drinking and getting high, and that would later escalate into other drugs including cocaine.”

After managing to graduate, he took a job at a machine shop and lived at home, but his mother grew tired of him underfoot and told him he needed to move out and be on his own. “She basically called Western Michigan University and asked them ‘Will you please take this kid off our hands?’ and somehow, I got in without even taking the SAT or any other tests.”

He married while in college and the couple had a girl in 1983, the year before Damon graduated. His drinking was excessive, and in trying to gauge a next move, he decided on the Navy, since a recruiter was wooing him because his knowledge of Russian would be an asset during the Cold War.

After completing boot camp in California, he was shipped to Texas and then Japan and then Rhode Island and finally a small island in the Bering Sea. It was a rough time for his wife and daughter, who sometimes didn’t see Damon for months at a time, especially when he shipped out aboard submarines. While he didn’t do drugs during his eight-year stint, “you could drink as much as you wanted, and I drank a lot.”

When his wife’s complaining about his drinking peaked, Damon became in his own words “a closet drinker,” and he’d hide bottles all about their home. It was his wife who suggested he try his hand at law: “You’re a smart guy,” she told him. “You could do this.”

He did well on the Law School Admission Test and was accepted into the program at Wayne State University, serving on its Law Review and excelling at classes “even though I was drinking all the time. For some reason,” says Damon, “I was able to do both.”

He snagged an internship at a law firm and ended up staying 14 years, becoming partner. He looks back and figures he was enabled by the firm to drink even while on the job: “As long as you’re bringing in money and good with the clients, it’s looked upon as OK if you drink a little bit.”

His personal life began to unravel, though. His wife was discovering his stash of bottles, and tensions prompted him to leave her. He became involved with a secretary at the firm, which created more conflicts. He finally left the firm, nailing down an even better position at another, and was eventually named partner there. But the drinking continued, and the firm sent him to a rehab facility in Mississippi. After the nominal 30-day stay, he flew home and “didn’t even make it through the airport and I was drinking again.”

Damon was on the brink of utter despair – out of work, out of money and living alone. “I knew I couldn’t stop the alcohol. I would wake up every morning saying, ‘God, don’t let me drink today,’ but I did. I finally gave up and said ‘I’ll just drink myself to death.’ And I tried to do just that. I was resolved to drink myself to death.”

One day during the spring of 2019, Damon awoke, drank his traditional pint of morning vodka, lay back in bed, and thought “What does it matter anymore? I’d had everything and now I had nothing. All the worst things I worried about had happened.” Still, he mustered enough resolve to enter a detox center in Brighton and, during a group discussion there, someone mentioned Guiding Light.

It would emerge as his savior.

“I called and made an appointment to be there on a Monday. My mother, who was now in her 80s, drove me. I showed up with a black plastic bag of clothes. At 57, I was the oldest guy there. My first day, this guy says get ready for CrossFit training, and I’m like, ‘Are you kidding me?’”

Damon looks back on that day of three years ago and sighs: “That almost killed me. But it was exactly what I needed – to change myself in mind, body and spirit.”

Damon was especially impressed with the way in which he grew spiritually: “My spiritual advisor was incredible. I found that my sobriety was truly based on my spiritual condition, and I really focused on that and it’s become a very strong point in my life.”

Damon also believes that going to support group meetings “four or five times a week” is crucial to his continued success. “That’s become a big part of my life, and allows me to both acknowledge my past, but also sweep away the debris and move forward.”

Living at Guiding Light wasn’t easy, he notes. His first two months, it was his job to clean bathrooms. “A lot of humility,” he says. In discussions with Brian Elve – who directed the Recovery program and now serves as Guiding Light’s executive director – “He would question me every day with ‘Why are you here?’ and ‘Why are you doing this?’ I was put on the spot every day, and every day I had to grow.”

Today, three years now sober, Damon is restoring his relationships with his ex-wife, their 38-year-old daughter and granddaughters ages 5 and 8. He lives alone in a Southfield apartment and is back practicing law, but on his own and not attached to a firm.

“I was a guy who used to wake up wishing I were dead because that would just be better for everybody. And now, I’m the product of an amazing program called Guiding Light.

“I will never be able to repay them for the help and support I got there.