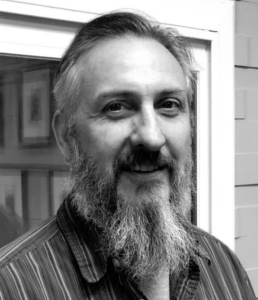 By the time alcohol had really sunk its claws into Doug, he realized he didn’t want to stop drinking – he wanted to stop being caught drinking. He’d been caught a lot throughout his life – drinking before, during and after work and losing job after job. Drinking while driving and piling up several DUIs and months in jail. Drinking in relationships and losing a fiancée.

“I knew I needed to do something,” Doug explains. “I tried going to support group meetings and would say I want to stop drinking but then go out and drink.

“I gave myself a countdown clock, telling myself I had two months, then six weeks, then three days to stop – but I didn’t. The only time quitting ever worked for me was when I was broke.”

The Detroit native grew up in a house that always had a full bar and a stocked fridge. His father had alcohol problems, Doug recalls, and booze was a regular part of his lifestyle. Alcohol “got hold of me early,” and Doug started drinking at age 13.

“A friend from high school had a family with a party store, and we bought from him underage,” Doug recalls. “Or we would go into Detroit looking for booze. If we got turned down at one liquor store, we’d head on to the next.”

Doug was arrested for his fourth DUI in 2001, just before his 30th birthday. His attorney advised him it would “look good for his court appearance” to see a counselor and attend support group meetings, which he did – and the habit stuck.

He attended support group meetings regularly, realizing the support group model “actually worked” for him. Doug spent the next five years sober, earning back his driver’s license, buying a home and car, and landing a job in construction management, his field of study at Michigan State University.

But Doug woke up on the Fourth of July in 2007 with an incredible feeling of loneliness. Sitting solo on his front porch, he thought how easy it had been to quit drinking, so “a couple of 40-ouncers wouldn’t be a bad idea.”

“So, I went out and got them, and that was my slow start,” he remembers. “I didn’t indulge for a lot of months – but once I started, it was game on. I was doing what I thought was controlled drinking but wound up drinking worse than I had been before.

“It wasn’t long before I lost my license – and I lost my ambition. I stayed drunk for the better part of the next dozen years.”

The spiral continued for Doug, who racked up more DUIs, lost more jobs and damaged more relationships, including those with his mother and brother. After an unsuccessful stint in rehab in Florida, Doug found himself back in Michigan – living with his dog in his truck in the parking lot of the library in Ludington, drinking and working at a local retailer.

After a second failed attempt at rehab and a conviction for felony DUI, Doug found himself with an ankle tether and an alcohol monitoring system. He landed a job at his rehab’s call center in Albion, trying to help people stay on the wagon.

“I realized at one point that my tether was coming off in two months, which meant I was going to want to drink again,” Doug notes. “I stopped going to my support group meetings since some of the folks I worked with were going to the same meetings. I let that be a hindrance. I didn’t want to be honest about my story.”

The irony doesn’t escape Doug that he wound up relapsing while working as a facilitator for relapse prevention.

He landed back in jail where he met a man who recommended Guiding Light. They discussed a number of the treatment programs in Grand Rapids, but his cellmate said, “If you get the chance, try Guiding Light – it’s a better overall program.”

That’s been the case for Doug, who appreciates Guiding Light’s “no-joke” approach to its Recovery program. The residential program combines evidence-based practices, life-coaching, therapy, support groups, spiritual direction and resources to equip men to build a life worth staying sober for. There are no costs for the program, which is paid through the generosity of Guiding Light’s donors.

Men who enroll are provided with educational classes based in principles of behavioral therapy.

Each week, men attend both group and individual therapy sessions with a licensed counselor specializing in addiction. Men also have weekly sessions with a life coach and a spiritual director, as well as daily personal contact with outside community support groups who are all committed to their recovery.

That combination resonates with Doug, who wholeheartedly embraced the opportunity to attend support groups, going to six or seven meetings each week.

“When I entered Recovery, they told me we don’t spend a lot of time talking about not drinking,” Doug recalls. “We spend time talking about the person you want and intend to be. We focus on fixing the problems that led to the drinking.

“It’s not only the idea of personal accountability but also accountability to the group. You’re either working to better yourself or you’re gone. In my first two weeks, someone was exited from the program. It sent the message that you are here for a reason, and if you’re wasting a bed and money from the donors, you won’t last.”

Doug was initially skeptical about the religious emphasis in the program but soon saw there was no pressure to accept a certain set of beliefs or values. The spiritual component is an integral part of Guiding Light Recovery, which treats all clients with dignity, respect and love. Staff approach their work from a Christian mindset, which Doug appreciated for its focus on helping others be better.

After completing the Foundations phase two years ago, Doug moved to Iron House, Guiding Light’s sober-living apartments that provide a safe and secure environment in a residential area outside the inner city. He secured a carpentry job, first swinging a hammer and now serving as a superintendent overseeing all trades at a $2 million job site. He’s earned multiple pay raises, promotions and other perks.

Doug is paying off past financial obligations with a goal of being debt-free. He is looking to buy a piece of property where he intends to build a duplex in his spare time. He loves the company he’s working for and looks forward to continuing advancement there.

Doug talks with his mother every Sunday, noting her voice is always “so excited” to hear about the good things going on in his life. He credits her unwavering faith, the support groups and Guiding Light with turning his life around.

“It’s been very humbling to realize people can be that generous,” Doug says. “I don’t feel there’s any way I can repay them for what I’ve been given. I had nothing, and now I have everything.

“I have a path to do anything I can set my mind to. Without the kindness of donors, this never would have happened.

“I’m living a better life than I ever could have. I couldn’t be more grateful for Guiding Light and the staff and donors who make it happen.”

Finding Faith in Recovery Working Out With The Phoenix