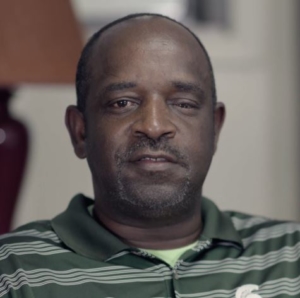 Since 2010, Guiding Light has been removing negative words like “broken” from its values and messaging to better foster a constructive community of faith.  “We took ‘demons’ out. We took ‘addict’ out. We put ‘hug’ in. We put ‘love’ in,” Stuart, Guiding Light Executive Director says. “We do not treat clients as broken. We want them to see this as an opportunity.

Dexter is one such man who has resonated with Guiding Light’s approach to spiritual recovery. Having suffered alcoholism before completing the Recovery program, Dexter now openly thanks the donors for the chance to restore his faith, which he calls “the best thing that ever happened to me. I embrace God will all my heart.”

But Dexter’s relationship with religion wasn’t formed immediately.  Before arriving at Guiding Light, Dexter was a holidays-only churchgoer whose time was consumed by both alcohol abuse and its consequences.

His addiction brought him closer and closer to danger, as he recalls blackouts and underdressed, drunken walks down Division in several inches of snow. After hearing about Guiding Light in passing, Dexter apprehensively entered the Recovery program on a whim, a moment his sponsor has convinced him was predestined. “There is no such thing as a coincidence,” he recalls hearing. “This is where God wanted you to be.”

Dexter’s growth accelerated quickly at Guiding Light, as he was tasked with asking the community what it means to walk in faith. The answer that stuck with him? “You’ve got to live it. You’ve got to believe that God is at your side at all times.”

Dexter spent much time at Guiding Light doing just that: living his faith by forging a strong connection with his spiritual director, attending as many classes as he could, and reading just as much.

A lot of people get on their knees and pray to the Lord with open hands, but can we actually accept what the Lord gives us?” Dexter asks. “You’ve got to accept the good with the bad. That’s the point I had to understand, that you have to go through something to get something.”

Just go in there with an open mind and learn,” Dexter advises for Guiding Light men still to come, encouraging persistence and action. “I don’t know if someone can teach you faith, but if you believe in the unseen, it’s grow on you…another thing you learn there is faith without works is dead.”

Is Equal What’s Right? From Near Death To New Lease on Life