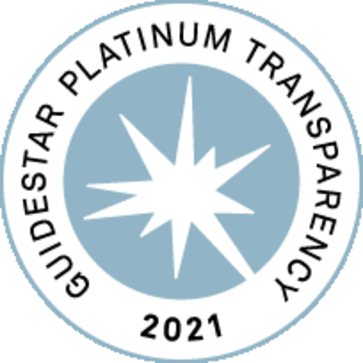 Grand Rapids, Michigan, May 3, 2021 – For the fourth consecutive year, Guiding Light has again been awarded a Platinum Seal of Transparency by GuideStar, the world’s largest source of information on U.S. nonprofits.

The Platinum designation is the highest level bestowed by GuideStar, an honor shared by just two dozen of the 2,500 nonprofits GuideStar tracks in the greater Grand Rapids area. The rating designates the “highest level of recognition and an opportunity for nonprofits to share their progress in a meaningful way,” according to the organization’s website. Guiding Light has earned the Platinum status every year since 2017.

“We are honored Guiding Light has again been recognized with Platinum status for our commitment to accountability and transparency,” said Stuart P. Ray, executive director at Guiding Light. “GuideStar is a highly respected organization for measuring nonprofits’ progress. This honor underscores the level at which we work to earn the trust of our current and prospective donors.”

The GuideStar Seals of Transparency were introduced in 2013 to provide visible recognition when a nonprofit shares information on GuideStar. More than 75,000 organizations have earned Seals, making the GuideStar Seal the most widely adopted symbol of transparency in the U.S. social sector.

Nonprofits ranked by GuideStar can qualify for any one of four designations: Bronze, Silver, Gold or Platinum. Of the nearly 2 million nonprofits the organization tracks nationally, approximately 11,700 are rated Platinum.

Founded more than 90 years ago, Guiding Light partners with individuals to fulfill their God-given potential through rescue, recovery and re-engagement in the community.

Over the last decade, Guiding Light has transformed from a traditional homeless shelter to a recovery and re-engagement community with four main programs – Recovery, Back to Work, The Job Post and Iron House.

Known on the street as “no-joke recovery,” Guiding Light’s peer-run Recovery program provides an intensive residential treatment path for men who struggle with alcohol and drug addiction. Since the beginning of 2021, Guiding Light has seen a sharp uptick in the number of inquiries and program enrollments for Recovery. Guiding Light’s Back to Work program focuses on getting men off the streets and into full-time jobs.

Founded in 1929 as the West Fulton St. Mission, Guiding Light has grown into a robust recovery and re-engagement community designed to help those living at society’s margins fulfill their God-given potential. The nonprofit has been building on a near century of compassion and celebrated more than 90 years of serving Grand Rapids. Through its Back to Work, Recovery and Iron House programs, Guiding Light works with men struggling with addiction and homelessness to return to society. Since 2017, Guiding Light has earned a Platinum Seal of Transparency from GuideStar, which underscores our commitment to accountability and transparency. For more information, visit guidinglightworks.org.