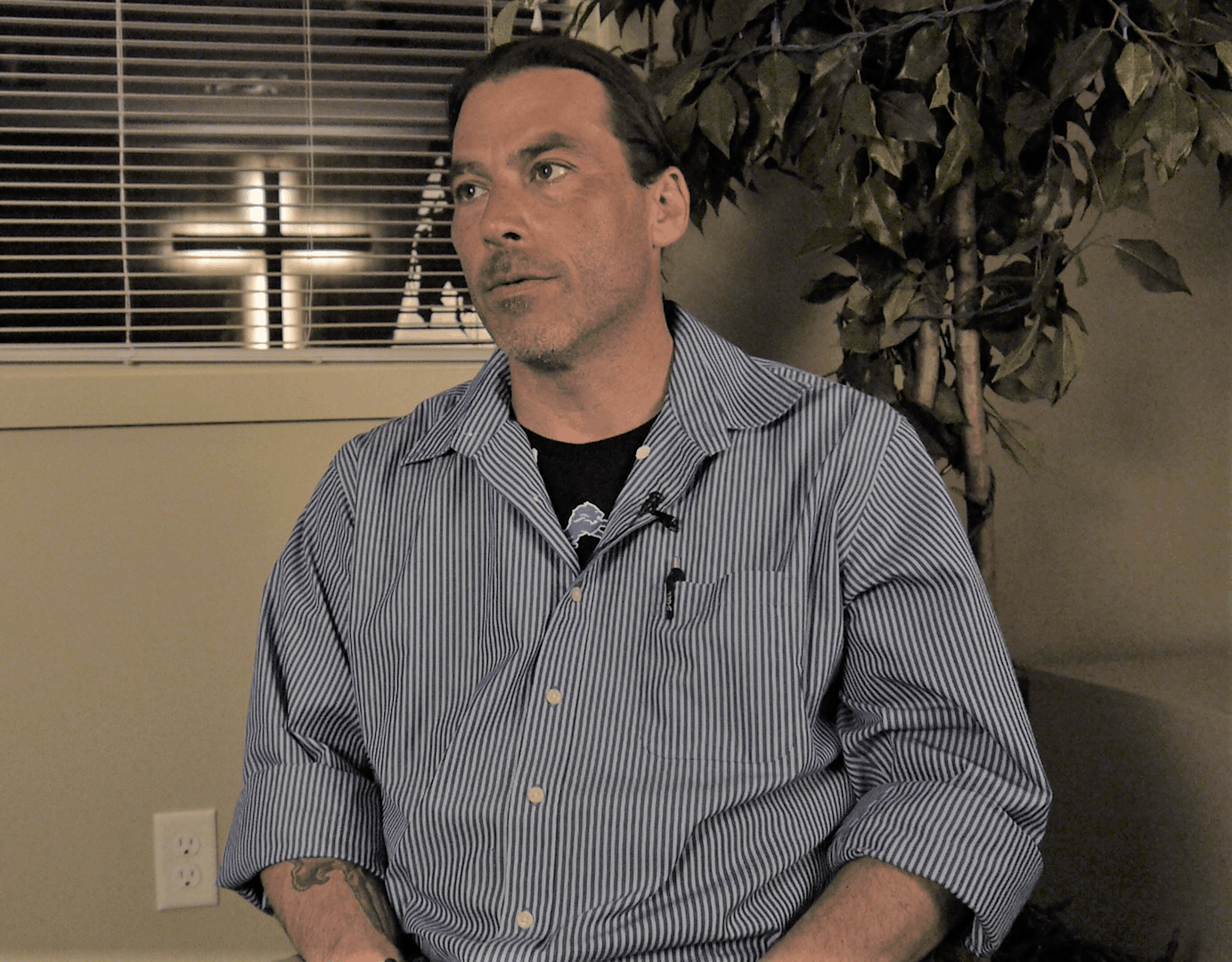 My Own Worst Enemy: Getting Sober for Father’s Day

With those six words, David’s teenage daughter gave him an ultimatum – and helped her father put an immediate hard stop on more than three decades of drinking, drug abuse, trauma and depression.

The next day, David called Guiding Light, arranged for his bills to be paid and made the trip from Hudsonville to Heartside to enroll in the nonprofit’s Recovery program.

It was a journey the self-described “professional alcoholic” nearly did not live to make. Four months later, David’s banking on buying a new home near his 14-year-old daughter and rebuilding a relationship he spent years either neglecting or damaging.

By his own reckoning, David’s been absent nearly half his daughter’s life. As he prepares to celebrate his first sober Father’s Day in nearly a decade, David is beyond grateful for this second chance. “I’m one of the lucky ones,” he says through tears. “My relationship with my daughter was shaky at first. One of my counselors gave me a nudge, saying it was time write her a letter – but I was scared. Everyone is afraid of rejection.

“The next step was to give her a call, which I did with her counselor. Now we talk weekly, and she’s starting to open up and trust me. I spent my first weekend out of the program with her. I was able to cuddle her, and she jumped in my lap and put her arms around me. So yeah, life is good.”

But it hasn’t always been good – or easy – for the Grand Rapids native, who had his first drink before an eighth-grade dance when a buddy swiped a bottle of vodka from home and shared it with David, who admitted the evening “didn’t turn out so well.” That first negative experience turned David onto pot, which he smoked until enrolling in the Army after high school.

To avoid drug tests, David returned to booze – and that’s where his drinking began in earnest. It was common for David and others in his unit to start binge drinking at 5:01 on Fridays, not stopping until Sunday night.

The drinking accelerated after David was stationed in South Korea, trying to chase away demons he can’t talk about to this day. He drank to escape, going in with friends on a fifth of gin and a case of beer before hitting the village bars.

After his tour of duty ended, David returned to the States and enrolled in college to become a teacher. He relegated his drinking to weekends only and felt he was managing. A business opportunity prompted him to leave his studies to join a local transportation firm that was later acquired by a national company.

“Toward the tail end, my alcohol consumption started to increase,” David recalls. “Instead of being only on the weekends, it flowed into the weekdays, and I wound up losing the contract. But it wasn’t my fault – it was always their fault. “I never wanted to take responsibility for any of my actions, and I was constantly pointing the finger. It took me a lot of years to figure the whole thing out.”

David married his first wife during this time and had his daughter. Alcohol and pot “damaged the marriage,” according to David, who admitted to turning into a “wholly different person in a situation that became extremely unhealthy.”

After his daughter was born, David set aside the booze for five years. During that time, his father died, he got divorced and fell in love with a woman who broke his heart. On the rebound, he started drinking again and met and married his second wife in what he said was a “downward spiral.”

“I started to neglect my own daughter,” he admits through sobs. “I didn’t want to be at the house, so I would escape. I didn’t realize the damage I was doing leaving my daughter alone with my wife. “When I caught her abusing my daughter, I thought, ‘this isn’t happening.’ ” But it was. David divorced his second wife and boomeranged back to the woman who’d broken his heart. They got engaged. His drinking accelerated.

“All of a sudden, my insecurities crept in,” David remembers. “All the old behaviors I remembered from my past in our earlier relationship were back. I became my own worst enemy.” Weekend drinking again turned to daily drinking, and then David started to hide alcohol – in the garage, in his car, under the deck, anywhere he might be when he needed a drink.

That all came to a head on the night of Dec. 4 when David got out of work early, lied to his fiancée and got plastered on vodka and beer until he passed out on their couch. She found some things on his phone that he was none too proud of, which led to an argument – and to David being locked out of his house and in the garage. “She was yelling at me through the door, ‘No one loves you – even your daughter doesn’t want to see you,’ ” David recalls. “I was completely inebriated and, when I saw the pistol, I grabbed it and put it to my head and pulled the trigger – and it didn’t go off.

“I sat there for a second and basically told myself I couldn’t even do this right. I put the nose of the barrel to a skid of new flooring we were had just bought and pulled the trigger again. “I put a bullet straight through the flooring.” That woke David up. He called a friend who came and got him.

But even that experience wasn’t enough for David to leave his fiancée, despite the tug and pull of their relationship – until a conversation with his daughter. “She told me about everything that had happened to her – how she felt abandoned, how my ex-wife would body-shame her and tell her she shouldn’t live,” David said, choking back more tears. “She told me about having to take care of me during my blackouts and helping me to bed. “Basically, she said, ‘Dad, it’s the alcohol or me.’ She’s the one who opened my eyes and saved my life.”

David remembers walking into 255 Division Ave. S for the first time and being downright scared. His mind was already making up excuses on how he could leave while doing the least amount of damage. Pictures of his daughter kept him there that first month – and then he immersed himself in the program and faced his demons head on. “After the first month, the alcohol fog started to lift,” David says “I slowly opened my eyes and started reading books. At first, it was little things, like my sponsor saying the serenity prayer. From there, I was reading the 24-hour book and then daily reflections – and on certain days, things would hit home.

“I used to think about God and treat him like a genie in a bottle, making wishes and they wouldn’t come true. It made me think about all the things that happened to me and question God: If I was one of your children, how did all this happen to me?

“But then the spirituality of everything started to make sense. I realized what I needed to do to get better was to read these books, and the prayer started to make sense. I was able to start sharing during meetings and gain more confidence. These odd things would happen, and one of the guys in the program would say, ‘It’s not odd – it’s God talking to you, mate.’

David finally cut ties with his fiancée and focused on his sobriety – and his daughter. He looks forward to introducing her to the men at Guiding Light who helped save his life – Brian, Charlie and Seth. He plans to take her to a BBQ at Iron House so his new friends can see the reason behind his recovery. Most importantly, he’s got big plans to make up the lost time with his daughter.

“The most important person in my life is still with me today – that’s my kid,” David explains. “Every day the bond is growing stronger. For a while there, I thought I would lose her.

“The guys at Guiding Light have a gift I’ve never been part of before: the wisdom and the downright caring. I pretty much cried through the entire program, and they made me feel like it was OK. It helped me heal and allowed me to open up, confront my own demons, learn how to handle them and to move forward.

Haircuts from Aveda The One Thing That Keeps Us From Gloating