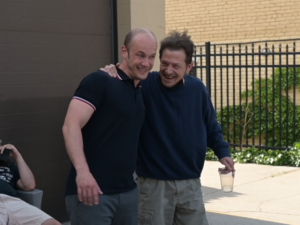 The son of Polish immigrants, Gabe is a first-generation American who moved to Chicago from Poland with his family when he was a little over 1-year-old. Now at age 28, Gabe has plans to visit his father, who moved back to Poland, for a summer trip he hopes will be a successful start to his new, sober life.

Gabe will tell you his past “isn’t the most horrible story,” but in truth, he went through several difficult experiences during his most impressionable years. From watching the physical abuse of his older sister when he was a child and learning his parents were getting divorced when he was 15, to losing a close friend to suicide his senior year of high school, Gabe found himself overwhelmed by feelings of helplessness, sadness and guilt.

With no healthy coping mechanisms, and a host of negative influences, Gabe found himself in a downward spiral by his early twenties. While he was introduced to alcohol and marijuana in high school, it wasn’t until a difficult breakup at 19 that he started trying “everything except meth” to escape his feelings.

“I had moments of clarity, but I drowned them out because it made me uncomfortable,” Gabe recalled. “If I started to cry, I’d get intoxicated to suppress those negative emotions.”

For a long time, he didn’t come to terms with just how deep into addiction he was and how it affected those around him. He was smoking more than $200 of marijuana per week and hiding vodka bottles from his parents in his room. He thought he was doing OK because he was making enough money from selling cocaine to help his mother pay bills – but it was also supporting his habits.

“My parents were worried I was stagnant,” Gabe said. “They knew I smoked, but other than that, I pretty much locked myself up in my room. I didn’t see I was hurting them by not standing on my own two feet, by not going out into the real world and not thinking about the future. I was just so infatuated with this idea of mindless self-indulgence, gluttony and instant gratification.”

Looking back, Gabe especially regrets his last visit to see his father in Poland in 2018. During the trip, Gabe got into a cycle of eating little to nothing while drinking every chance he got, which led to drunken arguments.

“If I get one drink, I can’t stop until I’ve reached a point of stupor or blackout,” he explained. “I was very rude to my father. I drank on an empty stomach and that just made me even more irritable.”

Then last year, Gabe’s mother started experiencing health issues with her heart and ended up in the hospital. Seeing his mother so ill and stressed was the final motivation to make a change. Gabe realized he had a problem and knew he had to take it upon himself to lessen the burden on her shoulders.

“I knew I needed to do the correcting,” Gabe said. “I needed to move out and stand on own two legs, but I knew I first needed to get sober.”

In looking for a solution, his mother reconnected Gabe with a childhood friend whose profession is helping people who are struggling with addiction. On a list of resources she provided to him, Guiding Light shone like a beacon.

It was one of few on the list that was not in Illinois, which meant an opportunity to fully remove himself from the environment he was in and the crutches he was used to depending on. He wanted to get away from the “big party people” he associated with in Chicago and put that past behind him.

It also was the only program he could join at no charge, thanks to the generous support of donors. Being able to enroll in the program at no cost meant Gabe could go all in on his recovery journey emotionally, mentally and spiritually – without life’s distractions. After he talked with an intake coordinator, Gabe came to Guiding Light the very next day.

“Donors are building our recovery through their support,” Gabe explained. “They are very literally supporting us, and we’re very thankful for this once in a lifetime, golden opportunity where everything is completely funded – from clothing to food to the roof over our heads.

“It’s that way so we do not have to worry about basic necessities during these months. It’s all about self-reflection, and you have lots of time in your head. It’s challenging revisiting and reevaluating past choices, but you gain an understanding of how you ended up in the position you’re in.

“It gives us the chance to do a lot of self-improvement in a very sheltered and nurturing environment.”

At Guiding Light, Gabe has gotten the fresh start he wanted and a solid chance at finding his independence. This is the first recovery program he’s joined – and with all that Guiding Light has equipped him with for his return to the mainstream of society, he hopes it’ll be the last.

“Guiding Light has taught me a sense of responsibility and accountability that I didn’t have before,” Gabe said. “I have many coping mechanisms to avoid that constant downward spiral I used to be in getting high and drunk every day. I see the big picture now. That was no way to live.

“I have grown so much in self-awareness and in understanding of how the surrounding environment impacts me,” he continued. “I have struggled with self-pity and self-hatred, but a lot of that burden has been lifted here just by being surrounded by people who understand me and who also care for me.”

Gabe found comfort in the structure of Guiding Light and the high expectations he was held to in the Recovery program. He says, “it’s not just about getting sober; it is about learning the behaviors and gaining a sense of confidence and responsibility to maintain sobriety once you get out into the real world.”

He has gained self-assurance by helping others through his role at the nonprofit sorting and distributing donations of clothing and hygiene items.

“People rely on me here,” he said. “By doing that service work, I’ve gained confidence and certainty in my own abilities.”

He has also renewed his focus on faith and spirituality, which to him is about taking his inner goodness and sharing it with others.

“I believe God aligns circumstances and brings certain people into my life,” he said. “I cried out asking for God to provide a solution to me and I was granted a solution with Guiding Light. I’ve been blessed with a lot, and the proper thing to do is to give back to this world.”

May 25 marked Gabe’s four months with Guiding Light, the end of the Foundations part of Recovery. Those who complete Foundations have the option to move to Iron House, Guiding Light’s sober-living apartment setting. While that was in his original plans, Gabe has chosen a different path for his next step after careful deliberation: A visit to Poland to make amends with his father now that international travel is opening back up.

“I have a chance to reconcile my past with my father by spending time sober with him this summer,” Gabe shared. “I want to make my father proud while he’s still on this earth.”

After that, he would like to go back to school and begin a career focused on helping others. He is considering becoming a life coach so he can share his experiences and give people the opportunity to learn from his mistakes rather than making their own. He also hopes to support his loved ones financially, especially his sister, who is a single parent with three children.

“I want to be a pillar of community,” Gabe said. “But I know I need to help myself before I can help others. The spiritual, mental and physical growth I’ve experienced here gives me hope for the future.”

Resident Meetings at Iron House Avoiding the Cliffhanger: How Your Will Reveals What What Matters Most