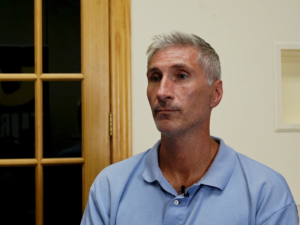 From Fear to Gratitude, Michael Shares His Recovery Journey

Like some young adults, Michael went to college after graduating from high school more because his parents pushed him. Without any real interest, his grades plummeted, and he dropped out.

But for the now 46-year-old, that was just the start of several tumultuous years trying to figure out life’s next steps – and it served as an accelerant for an addiction Michael started forming in high school. Alcohol was like a “social lubricant” for his shy personality that led him into a routine of binging every weekend from age 16 into his early 30s. His alcohol use worsened over the years, ultimately resulting in two DUIs and a revoked driver’s license.

After dropping out, Michael looked to enter the workforce, but he also struggled to find solid footing there as the economy took a downturn in the early 2000s. He found his way back into college, this time sticking with it and earning a bachelor’s degree in business management. That was in 2008  – just in time for the next financial crisis to hit.

Despite his academic achievement, Michael ultimately ended up bar tending in Nunica, an environment that exposed him to new drugs. At the bar, pain pills were considered a common currency for tips, and Michael started consuming them regularly. He justified it to himself, saying they helped relieve back pain he had from herniated discs. But as with alcohol, he felt the pills helped him be more social. Over time, he got so many “tips”, he didn’t run out of pain pills for months.

“I thought it was the perfect drug for me,” Michael recalled. “It checked all the boxes.”

When he finally did run out, he felt sick. He told a friend, who gave him methadone in response, saying, “If you feel better, you’re dope sick.” And that’s exactly what he experienced.

From then on, Michael’s drug use worsened exponentially. He went from taking a couple pain pills a day to a several pills throughout the day, then up to 20 daily. It got to the point that Michael would experience withdrawal symptoms within four hours of taking a pill, which turned out to be expensive.

He had gotten a prescription from a doctor for his own pain pills but also would buy additional scripts from other people to satisfy his addiction. By 2015, Michael had also been exposed to heroin powder and started snorting that a couple times a day as well. Cocaine, marijuana and ecstasy were the next drugs he started using. He knew he needed to quit, but when he drank, Michael said he’d always seem to find the drugs.

Eventually, he called his mom, whom he considered his best friend, and asked her if he can move home to Grand Haven to try to quit using. She agreed it would be beneficial for him to get out of the environment he was in and allowed him to move back in with her. It took a couple months, but Michael was able to stop using for some time – but it wasn’t a long-term solution.

He started to realize the true detriment of his addiction around the time his mother went on hospice care. Hospice staff and family members who were visiting his mom noticed Michael was stealing from her.

“They asked me to leave because they knew I was stealing,” he said. “It was embarrassing. The day she passed away, my uncle called and said I better come visit with my brother. I got to see her, and she couldn’t talk, but I’ll never forget the look in her eyes.

His addiction became much worse this past winter when he was living by himself in a trailer in Spring Lake. While he was earning some money from a new job, he regularly accepted money from one of his uncles. The loaned money was supposed to be for lot rent and bills, but Michael would “blow it on drugs.”

He tried to cold-turkey quit a couple of times on his own but couldn’t make it past five days because he would get so sick. By January, he was spending $500/week on heroin and he was regularly missing days of work because of the withdrawals.

“I was deathly afraid to run out because I would be dope sick,” he said. “I couldn’t pay bills. In January, I wound up evicted and pretty much lost everything. I had to stop using because I didn’t have any money left.”

Upon his eviction, two of his uncles put him in a hotel, and started calling around for help. After detoxing, he was brought to Guiding Light. Michael heard the organization was strict, and he was actually afraid to go. He admits the difficult questions in the intake interview scared him. Men in Guiding Light’s program learn early on about the importance of vulnerability and being honest about their pasts in order to heal.

Michael said it finally started to set in what Guiding Light Recovery could mean for him during his second week, when his fear of the program turned into gratitude. That’s when he started to come to terms with the fact sobriety is a lifelong process, and he needed to be at Guiding Light to learn to live life in a new way.

“Before I got here, all I could think of is if I could get detoxed, then I could have a chance,” he said. “It never dawned on me that once I got sober, how I would stay sober.”

Now having been at Guiding Light for five months, Michael’s outlook has changed. He describes the Recovery program as “the best thing that’s ever happened” to him in his adult life.

The most impactful takeaways have come from the seven focus points used in Guiding Light Recovery: willingness, honesty, vulnerability, self-awareness, self-compassion, responsibility and spiritual formation. For Michael, honesty and spiritual formation were the “big ones.” For so long, lying was one of his most natural instincts and before coming to Guiding Light, he felt he had a “big disconnect with a higher power.”

The other aspects of the program that have been influential to Michael are the connections he’s made through Guiding Light’s introduction to addiction support groups in the area and the relationships he’s built with others.

“I’ve replaced these old unhealthy relationships with new ones,” he said. “I’m surrounded by people who have my best interests in mind.”

Now, Michael has his eyes on finding a job that works around his recovery schedule and that will enable him to save enough money to be able to move to Iron House, Guiding Light’s sober living apartments. Being able to live at Iron House before fully reentering the “real world” will help him further hone the skills and routines of an addiction-free lifestyle. Guiding Light is showing him how to live up to his God-given potential and to create for himself a life that is worth staying sober for.

Michael has never been in a rehab program before Guiding Light, but he had heard others emphasize the effectiveness of the programming. In Michael’s own words: “The education is what makes the difference. What we’re taught here – from the classes, the counseling, having a therapist, just learning the difference between short-term gratification and long-term enjoyment – is an amazing gift.”

Michael is committed to maintaining this sober journey to honor those who have helped him.

“When I was at my worse, two of my uncles saw me when I needed help – really they were all I had left,” Michael said. “For how they helped me, I feel that I owe them. To be able to change is one of the best gifts to give them and my mom.

“I don’t think I could ever really repay the donors, but I hope, by getting myself together and using this opportunity to be the best version of myself, that is one way I can give back.”

You Can’t Get Sober Without God: Missions Intersect for Rev. Tim Wilson 3 Big Gifts That Won’t Break the Bank