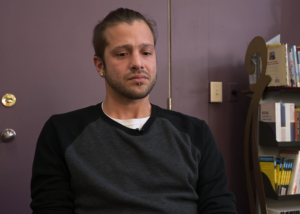 It got so bad that DJ used to shrug off his vomiting sessions as simply a way to make room for his next bottle of booze. “We’re talking horrible mornings,” he recalls. “So bad I couldn’t get out of bed. There’s a reason they call alcohol a spirit – because it can becomes your higher power.”

But that was then. Since enrolling in Guiding Light’s Recovery Program in May, DJ has not only remained sober, but is holding down a full-time job. In December he moved into Guiding Light’s Iron House, a sober-living apartment setting that provides a safe and secure environment for men seeking to transition into conventional society.

DJ, 35, was raised in Jenison, the second of three children born to parents who both worked, and divorced when DJ was a toddler. He recalls that his mother and father had a lot of resentment towards each other, and that he was able to pit them against one another and “fall through the cracks.”

“At 15 I had friends who were all jealous because here they were, like babysitting at home, and I was off partying for a weekend in Chicago,” he notes. DJ was able to hide the truth from his parents by lying about his real whereabouts, adding that “they weren’t really paying attention” since they had a newly born grandchild “who became the sun that rose and set for them.”

“I was good at staying under the radar,” he adds. “I got away with a lot.”

DJ became more and more dependent on alcohol and drugs. Over the years, his addiction escalated to include cocaine, marijuana, mushrooms and assorted hallucinogens. At 17, DJ dropped out of high school to pursue full-time work waiting tables. The tips especially motivated him – and so did easy access to alcohol in the establishments where he would be employed for more than a decade.

At 23, he entered his first rehabilitation program, but a week afterward was drinking again, something he says was now “out of control.” He tried kicking the habit by moving to Florida, but discovered that the so-called “geographical cure” was a myth. “My problems just followed me,” he recalls.

DJ lived a while in California, but with the same result: “Anywhere I’d move, the most important thing was to be within walking distance of a liquor store. I’d tell my roommates I was going out for a cigarette or a phone call, then run to the store, drink a few shots and return home in the time it might take to have had that smoke or make that call.”

DJ says he was ingesting “at least a fifth a day,” and sometimes more: “I’d drink until I either passed out, or 2 a.m. rolled around and I couldn’t buy anymore.”

He tried at least two other rehab options, but nothing worked. Back in Grand Rapids, he was aware of Guiding Light, but had always dismissed it as a traditional homeless shelter. When he learned that Guiding Light offered a real, focused, and professional substance abuse treatment program, he made the call. DJ arrived at 255 Division Ave. S this past May, showing up two hours early for his morning appointment. “I was ready to go,” he remembers.

One of the first things DJ viewed upon entering Guiding Light was the cross hanging near the entry, and, as a gay man, immediately felt unsure about what he was getting himself into. “I sort of puffed out my chest more and stood up a little straighter because it’s a defense mechanism. I didn’t have the best relationship with religion when I grew up, and I didn’t know what this place was going to be like for someone like me.”

One of the first things a client will see when passing through the front doors of Guiding Light is a sign that reads: We do not presume you to be Christian, but it is our hope that we are Christian toward you and welcome you in the same manner that each of us has been welcomed through Jesus Christ into the heart of God.

Over time, DJ was relieved to discover that Guiding Light doesn’t force religious beliefs on anyone, relying instead on spiritual direction, evidence-based practices, life-coaching, therapy, support groups, and other resources to equip men to stay sober and live their lives in a new way.

“Guiding Light doesn’t cure you,” says DJ. “It changes your thinking. Your problems don’t go away, but they teach you how to work through them. It’s very distinctive.”

In DJ’s case, he was able to discern his present-day self from the youngster who emerged whenever he drank – “the little boy who was upset about the divorce, the abuse. What I learned was how to integrate my souls into one person. Today, I don’t walk ahead or behind that other person. We walk together.”

DJ gives special credit for his recovery efforts to Brian Elve, director of Guiding Light’s Recovery Program: “He’s the one who helped me bury the hatchet with that kid inside me. I used to speak about him in the third person. He was a tortured spirit who ruined my day and came out when I was drunk. Brian helped me realize we are one in the same.”

Eventually, DJ embraced spirituality that wasn’t aligned with “clouds parting or other kinds of epiphanies” but instead realizing that “My higher power isn’t in the sky; He’s all around me.  It’s the goodness and kindness in me.”

DJ knows the transition to Iron House will be an adjustment, but he’s willing to put in the work. He realizes now he no longer must imagine a tombstone that reads: Here lies DJ – dead, and a drunk and gay.

“That’s what I used to think,” he says. “But at Guiding Light, they helped wipe that clean, and I find myself in such gratitude. My happiness can’t be owned or consumed; it’s part of my spiritual awareness. As men and women, we have the cognitive ability to think, react, to realize the beauty in the world. And if we look hard enough, it’s all around us.”