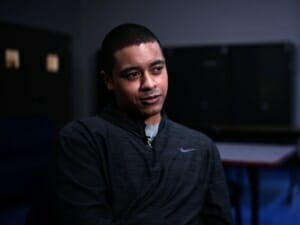 Living and Learning that ‘No Man is an Island’

If Dennys has learned one thing while at Guiding Light, it’s this: He couldn’t recover on his own.

The opposite may be true for some, but everything Dennys is learning about himself convinces him that he needs others to overcome the hurdles accompanying addiction.

“The advice I would give others facing addiction is to admit you can’t do it on your own, and to trust others who have gone through it,” he says. “You need to adopt new thinking and new ways if you’re going to change.”

Dennys was born and raised along with an older brother in Brooklyn, New York. His parents separated when he was just 2, divorcing five years later. His mother married again, but it ended in tragedy when Dennys’ stepfather took his own life in their basement when Dennys was 12. “It was tough,” he recalls, “especially on my mom. She was really depressed, and I spent a lot of time comforting her.”

Dennys not only managed to finish high school, he excelled, graduating with a grade point average of 3.8 at a technical institute in Connecticut where he focused on the culinary arts. On the downside, he began drinking alcohol at 16.

While enrolled in college, he increased his drinking, and began using marijuana regularly. “I’d binge drink maybe twice a month, and I was smoking weed every night. I did well in my first semester, but by the end of the year, I was struggling.”

Looking back, Dennys figures he used alcohol as a way of bolstering his self-worth: “I think that I lacked confidence, and alcohol gave me what I needed to talk to people, meet more people. It made me comfortable in my own skin. I think it was my way of self-medicating for depression.”

He dropped out at 19, began smoking and drinking even more, and progressed to selling weed to support his habits. He worked mostly in restaurants and factories, including a manufacturing facility “where everyone smoked weed and got high, which made it even more acceptable. I was smoking during every break, and after work, and also selling to co-workers.”

At 21, his mother thought it best to move Dennys and his brother out of Connecticut, so the trio settled on Grand Rapids, where her brother lived. Dennys stayed sober nearly a half-year, but then “met a girl who wanted to smoke weed with me after work and it started all over again.”

Getting drunk and high was now occurring “every single day,” says Dennys, adding that “Drinking and smoking weed after work was a great way for me to unwind, or so I thought at the time.”

Dennys reached a low point after getting into a fight that resulted in a felony conviction for “assault with intent to do great bodily harm less than murder” and spent six months incarcerated.

“I’d never been in a fight in my life,” he says, noting that he’d participated in boxing, but as a sport and never out of the ring. “That’s not who I am,” he says, blaming what happened on his addictions.

Regardless, the felony record that follows him today “makes it almost impossible to get an apartment, to get a job, to do anything.”

“That,” he says of his legal trouble, “was the beginning of my downward spiral,” but even so, it did not serve as the catalyst for him to get straight. He admits to “faking” my way through substance abuse classes” while continuing to use.

Thinking it would be easier to nail down jobs and apartment in a big town like Chicago, he moved there and secured good-paying employment “at a fancy Italian restaurant in Lincoln Park.” It didn’t help, though, that he worked behind the bar, which accelerated his drinking to the point where he was now blacking out.

“I would black out all the time, waking up at home or in a hallway and even two times in the hospital, not knowing how I got there,” Dennys recalls. Twice, he was robbed while stumbling home drunk and high, resulting in back injuries the second time.

Last summer, Dennys attended a couple of family gatherings, seeing relatives for the first time in months. They were shocked at how quickly and seriously he succumbed to alcohol, and alarmed when he blacked out and became unresponsive.

“All of them were really concerned and urging me to get help,” he says. “They had no idea of how bad I’d gotten.”

At the pleading of his mother, Dennys returned to Grand Rapids to live with her. He tried to get and stay sober on his own, but it only lasted a few weeks. “I would drink a pint or two of vodka a day, and use weed throughout the entire day.”

By late last year, he’d lost his wallet and found himself with no money, no car, no job, no license and no permanent place to live. “That was the week I decided I couldn’t do this on my own,” and he reached out to the pastor of his mother’s church and was referred to Guiding Light.

He entered the Recovery program Nov. 9, 2021 and is now in the process of seeking employment. Dennys is eager to repay more than $10,000 in debt he’s accrued over the years — $4,000 for unpaid rent in Chicago, $3,000 in credit card debt and thousands more in back taxes owed. He also is exploring ways to expunge the felony from his record and wants to reenroll in school to study either social work or the computer field.

As for his spiritual life, he’s attending a Buddhist temple with two others in the Guiding Light program, embracing, among other elements, the “eight-fold path” which encourages devotees to be ethical in word, deed and thought.

Dennys knows his personal path is lined with obstacles, and he acknowledges that at times, “it’s a bit overwhelming, but I feel like I can do this.

“There are a lot of challenges,” he says, “but with the help of so many people at Guiding Light who are in my corner, I’m ready to tackle them.”