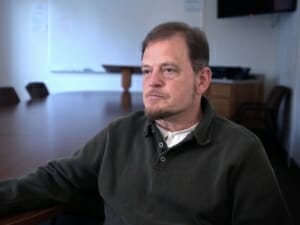 I Have Some Hope: Guiding Light Helps Victor Cope with Decades of Trauma, Depression, Alcohol

When Victor landed on the doorstep of Guiding Light in February, he hadn’t touched a drop of alcohol in nearly five years – but he was far from sober. He’d been holed up in his basement bedroom for days, ignoring calls and texts from increasingly concerned loved ones. It was the second time this winter Victor had gone into “this really dark place,” thinking about suicide – and about ways he could “accidentally die without causing too much trouble for others.”

The police officer who knocked at his door, insistent Victor answer, helped him out of that basement and propelled him into Guiding Light’s Recovery program.

“I felt like an old horse who was ready to be put out to pasture,” explains Victor, 59. “I detested my life – I was disappointing people and breaking promises to them. My finances were a mess. I couldn’t seem to get a handle on life at all.

“I told Michael at the front desk I was at a point where I want to go back to drinking or end my life. Most people who come here asking for help are recently sober. I’m very thankful the staff understood there’s such a thing as a dry drunk. I’m eternally grateful they looked at me as a candidate worth bringing into the fold.”

Victor came to Grand Rapids five years ago, his mom a native of St. Louis  and his father from Mexico City. His parents met at a Bible college in Milwaukee that was the predecessor to what is now Grace Christian University in Wyoming. The couple married and returned to Mexico City to make their home.

“My dad gradually began to get into his drinking ways, and his alcoholism moved at a pretty fast clip,” recalls Victor, the middle child between two sisters. “What was originally a nice home became a kind of scary place. Think of all the categories of abuse – physical, sexual, verbal and spiritual – and they all existed in our home.”

Victor’s grandmother intervened, finally convincing his mother to leave. The family took advantage of one of his father’s benders to pack up their apartment and head north with the help of a missionary friend, who drove them to the Texas border. Once safely across, they were driven back to his grandmother’s home in Illinois.

“When my dad realized what happened, he did make contact with us,” Victor remembers. “But he was married to his alcoholism and didn’t make any sincere changes in his life or attempt to join us in the U.S.

“My mom was very clear she was not interested in going back to Mexico and living with him. My dad decided he was free to pursue his vices without being hampered by a family. I only spoke to him once  before he died when I was 19.”

While Victor knows his mom made the right decision – the only decision she could make – the move from Mexico to Illinois was a “sudden and jarring change in life.” He went from a vibrant community with friends and a first crush in cosmopolitan Mexico City to attending junior high in the far-north suburbs of Chicago as his mom began to recreate them as an average American family.

“My mom’s family wrapped their arms around us,” Victor says. “My mom and grandmother bought a small townhome. I’m so grateful for everything they did to help us settle into our new lives.

“But the core issues of abuse and dysfunction remained. There wasn’t any counseling for that nor any time to really debrief. Trauma needs to be addressed at some point.”

Victor struggled – with depression that threatened to crush him as the years wore on. With the dark impacts of that early abuse. With three failed marriages. Drinking became a serious problem in his mid-40s.

“As my second marriage was falling apart, I began to close the bar down,” Victor recalls. “I gave myself permission to do what I wanted. Alcohol was fun at the beginning but then became a slave master.

Known on the streets as “no-joke recovery,” Guiding Light is a residential program that  combines evidence-based practices, life-coaching, therapy, support groups, spiritual direction and resources to equip men to build a life worth staying sober for. Funded entirely by donors, the Recovery program is designed to give men structure by replacing the chaos of day-in-day-out addiction with a proactive, extensive, all-encompassing and healthy routine.

That resonates with Victor, who has embraced all the program has to offer as he continues his journey. He’s embraced the routines. He’s finally dealing head-on with his depression, making noticeable progress in just four months. He’s learning to move past shame and truly talk with God.

“I’ve been trying to pinpoint what it is about Guiding Light that has made a change in me,” Victor considers. “It’s not one thing – it’s everything combined.

“It’s this perfect constellation of stars that lined up: the one-on-ones with my life coach. The individual and group therapy. The classes. The exercise is huge for depression. Regular sleep. My spiritual coach, Larry. The ability to delve deeper into some of the childhood trauma. It is all really useful.”

Victor’s now out of bed every morning at 6 a.m., bed made and ready to tackle his day. The scheduling and accountability over some of the smaller things have given him hope he can tackle the bigger ones.

“There’s a doctrine of doing small things well,” he explains. “If I can be responsible about little things, I can reflect and meet the bigger challenges. I think I used to disregard the little things. Who cares if I have the reschedule that appointment – they’ll understand.

“Addiction kept me stunted. This program is helping me grow up. I’ve always been able to dissect my problems and write a plan of action, but I couldn’t follow through.”

Victor is confronting the guilt and shame from his past traumas and addiction. Shame had prevented him from having a relationship with God. As he put it, “Why would God want to hear from me if I’ve been disappointing him consistently and can make no guarantees?”

With support from his spiritual coach, Victor is putting together an official “divorce” from shame so he can move on – and move forward. His time at Guiding Light has given him permission to be compassionate to himself.

“I’m beginning to believe I can make a contribution,” Victor says. “I no longer go from being a doormat to being king of the world. I can be a regular guy. If I tell someone, ‘I’m going to come and paint your house,’ I want to be the guy who shows up.

“I’m wondering how many more years God will give me so I can get some things done. I have some hope now.”