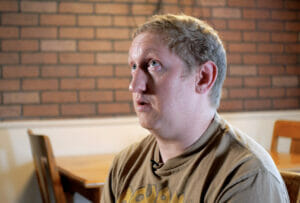 Kenan’s descent into addiction began when he took his first drink at 14 years old. Although it started out innocently enough, he found alcohol to be a crutch that he couldn’t live without. Well into his twenties, Kenan appeared to be a functioning husband and father of a newborn son, but underneath it was clear that he had very serious problem.

“My wife caught me drinking I don’t know how many times,” Kenan recalls. “It didn’t stop me. Something kept dragging me back out there. By this point, I was pretty physically dependent on alcohol.

“I was spiraling faster and faster. It was like a switch had been flipped. I didn’t really care anymore.”

He and his wife had just welcomed their second child – a girl – who was born with multiple medical complications. His daughter spent her first month in the hospital, unable to keep formula down or to gain weight. Kenan’s parents watched his son while his wife stayed in the hospital by their daughter’s side. And Kenan?

As with so many, Kenan’s addiction started slowly and innocently enough. The son of a minister and the youngest of three boys, Kenan was with high school friends when he was offered his first shot. After downing a few – the only one in the group who indulged – Kenan rode his bike back home where he was met by his older brothers, who made him throw up the alcohol before his parents got home.

Kenan enrolled in a Bible college in Tennessee after graduating from high school, determined to be a youth minister and follow in the footsteps of a beloved mentor. Yet toward the end of his studies, he wasn’t sure about this path. He was keeping beer in his fridge – a no-no on campus – and drinking every weekend. He’d already met his soon-to-be-wife, who knew about Kenan’s drinking – but not about its growing frequency.

The couple married and moved to Virginia so his wife could take a job in children’s ministry while Kenan landed a second-shift job in manufacturing. The drinking started gradually, “mostly weekends and some nights drinking beer here and there, but not drinking to get drunk,” he recalls.

Away from family and working different schedules, the couple grew unhappy and decided to split the difference and take jobs in Indianapolis – half-way between her family in Knoxville and Kenan’s in Lansing. Both landed jobs in a preschool – and Kenan’s drinking increased.

After shattering his ankle in 2017, Kenan was bedridden for six weeks. His wife was pregnant with their first child, and he had a “lot of fear.” He began mixing his pain killers with booze, and his drinking accelerated again.

“I wasn’t convinced I was an alcoholic,” Kenan notes. “I wasn’t drinking but I wouldn’t say I was living a sober life. I still had the same desire to drink, but for 18 months, I was able to say no. I wanted my family more.”

During the COVID lockdown, his wife and son moved to Michigan to join Kenan and his parents. He steered clear of the booze and landed a job driving for Amazon. In November 2020, the couple learned they were expecting again – and Kenan again found himself wanting to drink.

“You’d think that would stop me but oh, no,” he says. “During COVID, we had no community. I was anxious and restless. The alcohol seemed to help me with that – until it made things worse.”

His daughter’s health complications created the perfect storm for Kenan, who found himself drinking more and more. One night, he told his wife he “didn’t want to live like this anymore” and asked for help.

The couple started looking for rehab programs in Michigan, enrolling Kenan in a program in Flint that was supposed to last two years. He stayed 16 days.

Kenan says it was a “God moment” that led him to Guiding Light. Recommended by an aunt and uncle from Grand Rapids, Guiding Light’s “no-joke” Recovery program seemed to tailor-made for Kenan. The program takes a holistic approach to addiction recovery, providing individual and group therapy, spiritual advisors, life coaches and support groups.

But Kenan “drank up to the very last possible second” and failed his breathalyzer test during his initial intake interview with Guiding Light. His wife refused to pick him back up, so Kenan’s aunt and uncle took him in for a night. A few days later, he had a second intake appointment with the nonprofit.

“I was so nervous they wouldn’t let me back in since I had screwed up so royally the first time,” Kenan recalls. “Apparently me showing back was what it took. Jacob, who wound up being my life coach, told me that’s how he knew I really wanted to enter the program.

“ ‘You were pretty much accepted at that moment,’ Jacob told me. ‘A lot of people don’t come back.’ ”

That was 8 months ago. Kenan successfully completed the Foundations prion of the program, moving to the Iron House sober-living community in May. It’s the sense of community that has kept Kenan going, even though he’s living an hour away from his wife and children.

“I made a point of being completely honest when I was in Foundations,” he notes. “I had been so dishonest with everyone around me. I realized I was lacking a community who understood what I was going through.

“Spiritually, the biggest thing Guiding Light has given me is this sense of community and belonging. I’ve always had trouble connecting. It’s never been natural for me to go and hang out with people. Drinking made that worse. Being here has really opened my eyes and softened my heart about being part of a community.”

Kenan appreciates the total package of Guiding Light’s recovery program. The spiritual director who’s helping him to connect. The support groups that keep him grounded and accountable. The therapist who is also a recovering alcoholic who’s been through his own journey.

His progress enabled him to secure a weekend pass, allowing him to spend Father’s Day with his family in Lansing. Seeing his wife, who is stressed but holding the family together, has “strengthened my conviction and commitment to staying sober.” He’s grateful for the extra support of Iron House, which is helping Kenan “ease back into life.”

And he’s grateful to Guiding Light donors, whose generosity enables the program to be offered entirely free of charge.

“There are a lot of organizations people could donate money to but I’m glad our donors decided to put faith in the process of Guiding Light, which is dedicated to help people save their lives and change for the better” Kenan says. “It’s not just about being alcohol- and drug-free – you can get clean at a detox center.