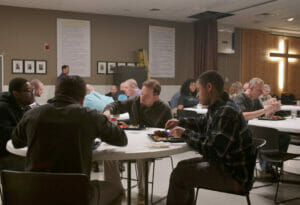 Believe, Invest, in Recovery Reimagined at Guiding Light | Your Donations Feed Our Community

Your donations have fed over 300,000 this year alone! Please invest in Guiding Light to continue helping those that need it most.

For Allen Holt, working at Guiding Light is more than a job, it’s a calling. As Food Services Director, his primary responsibility is preparing and serving the men in the program with 3 full meals a day—7 days a week.  On top of that important work, Allen also manages our collaboration with a vast network of charitable and religious organizations in our community—providing them with tens of thousands of pounds of donated food. It is estimated that by the end of 2022, in addition to over twenty thousand meals served to the men of our Recovery program, Guiding Light will have distributed over three-hundred thousand meals to our neighbors.

Allen has a special affinity for the work we do because he himself has been on the receiving end of it. Nearly two years ago he was a patient at the Pine Rest Detox clinic in Grand Rapids, recovering from alcohol withdrawals and a suicide attempt in which he tried to purposely overdose on opiates and cocaine. “I just happened to see a flyer in the clinic that said 78% of all men Guiding Light that complete the program remain sober for a year and it caught my eye. I called them up and an actual human answered the phone. I told him what was up, he asked when I could be at Guiding Light. The next thing you know I’m standing outside of the building. I have no clue where I’m at, and I have this huge guy holding this door open for me, and he tells me his name is Brian (Guiding Light Executive Director, Brian Elve).” It was at this moment that Allen’s life took on a new chapter. “It’s been a journey, I didn’t realize right then and there that I was turning my will over to God and admitting that I was powerless over drugs and alcohol when I decided to ask for help until I got there. Allen believes God clearly had other plans for him. He was accepted into the Recovery program in June 2021, and has been with us ever since. “I completed the program, and with my background in kitchens and cooking they offered me a job,” he said. “I didn’t realize it would be more than just cooking. It’s phenomenal what we do and how we feed people because we’re a non-profit. It’s just amazing how God puts all this together gives us enough food to share with the community. Allen is proud to be a part of the solution of a problem he had spent much of his life being on the other end of. He’s thankful to God and for Guiding Light’s willingness to take someone like him in and give him the help he needed to get back on his feet. “I gave in and this program got me straight, so now giving back is my ultimate goal…so the more I give the more rewarded I feel. And just to see the smiles on faces when they get this stuff…it’s amazing.”

Giving to Guiding Light is an Investment in All of Us

At Guiding Light, we don’t hold back on giving the men under our care the fuel they need for success. We, and by attachment, you, invest heavily in each individual that walks through our doors. We do not believe in giving men just enough resources and help to keep their heads above water. We seek to give men the means to empower themselves, find their inner strength, and develop a true relationship with God, in order to wake up and live a different life. Allen is just one of so many examples of men that have come to Guiding Light at the absolute end of their rope and at the peak of utter desperation, despair, and hopelessness. He is an absolute testament to the incredibly powerful and transformative work that takes place here. By any rational measurement, Allen should not be alive today. Yet somehow, here he is, doing (as it says on his business card) “God’s work.” None of the success stories like Allen’s that come out of Guiding Light would be possible without the generosity of our community. Guiding Light is 100% donor-funded and does not receive any federal, state, or local government funding. Men like Allen are alive only because of the willingness of individuals to take a chance, to think big, and to invest in Guiding Light.